It’s human nature to compare foreign cities to those in your home country. Cape Town is different for this American.

While it has a similar feel to San Francisco, Cape Town’s look and vibe are all its own. 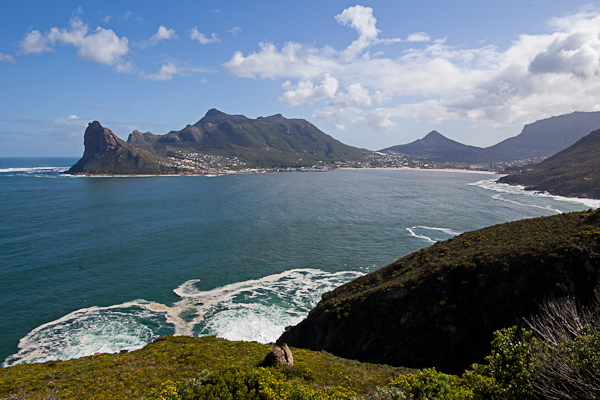 Hout Bay along the Atlantic side of the Cape Peninsula

Set against the backdrop of Table Mountain and bordered by the Atlantic Ocean, Cape Town shines like a jewel.

From the sheer drop-off of the mountain, it looks as if the city floats atop the ever-changing, turquoise-blue waters. An adornment of homes and businesses hugs its frothy coastline. 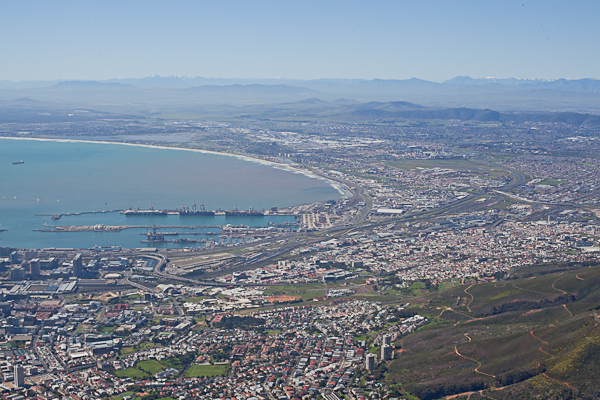 One of many stunning views from Table Mountain

An impressive skyline of modern high-rise buildings fills Cape Town's central business district. Dutch- and French-influenced architecture marked by gables and cast-iron filigree also lines its streets, a reminder of a past marked by riches and struggles.

While inhabitants of this area date back to the 1400s, Jan van Riebeeck of the Dutch East India Company officially established Cape Town in 1652. At that time, it was used as a "refreshment" station for ships traveling to the East.

What’s even more incredible than its natural beauty is comprehending Cape Town’s newness as a democratic country just 20 years in the making.

The symbolism behind its new flag tells the story. A sideways “V” flows into a single horizontal band, marking the convergence of diverse elements into a unified road ahead.

After 46 years of apartheid rule, it’s amazing to see how far this country has come in its reconciliation.

We got an enlightening and moving lesson at the Apartheid Museum in Johannesburg. The museum visit alone makes Johannesburg a must-stop on your South African itinerary just to get a deeper understanding of this country’s history.

Getting to know South Africa

You could call South Africa a land of plenty – from natural resources and industry to capitals and languages.

There are 11 official languages, with most people speaking English. In the spirit of inclusiveness, five of these languages are incorporated into South Africa’s national anthem.

The country’s democratic branches are spread among three capitals. Pretoria is home to the president and cabinet, Cape Town is the legislative capital and Bloemfontein seats the Supreme Court of Appeal. While not considered a capital, Johannesburg houses the Constitutional Court of South Africa.

In addition to being the world’s top miner of platinum, gold and chromium, South Africa’s other industries include auto manufacturing, metalworking, machinery, textiles, iron and steel, chemicals, fertilizer, foodstuffs and commercial ship repair. Financial services, tourism and agriculture also are big business for this emerging country.

As far as cities go, Cape Town is South Africa’s pride and joy.

The city of 3.5 million has something for everyone. It offers activities for all interests including nature, adventure sports, museums, fine dining and wine country.

Want to swim with the great white sharks? No problem. Interested in diving off the world’s highest commercially operated bungee jump from a bridge? You can check that off the list, too.

There are plenty of reasons to visit what The New York Times listed as the No. 1 place to go in 2014. Here are a few of the experiences that made me fall hard for Cape Town. For us, no bungee jumping was required.

1. Get a bird’s-eye view of the city on Table Mountain. If there is sunshine, go directly to Table Mountain. Do not stop. You never know when clouds could obscure your view, especially during South Africa's winter months.

Table Mountain is one of Cape Town’s key tourist attractions for good reason. You will be blown away by one of the best views in the world. This is no exaggeration. 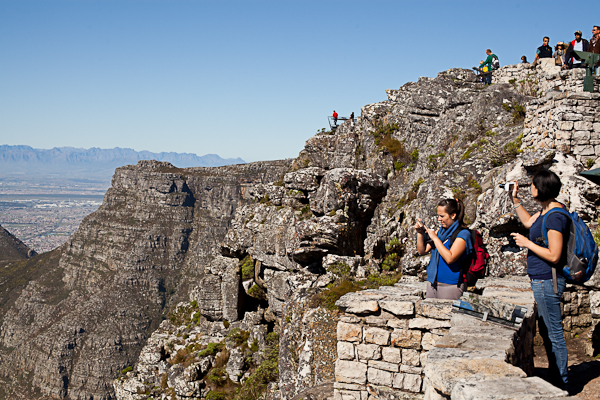 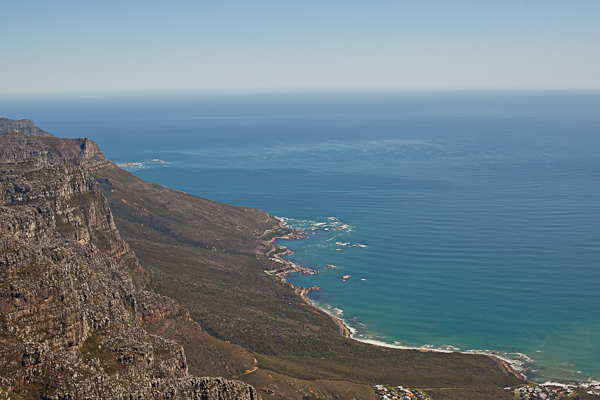 Weather-permitting, the Table Mountain Aerial Cableway quickly gets you to the top. You don’t have to worry about negotiating a prime viewing position on the cable car. It rotates 360 degrees on the way up and down the mountain so everyone gets a chance to enjoy the views. 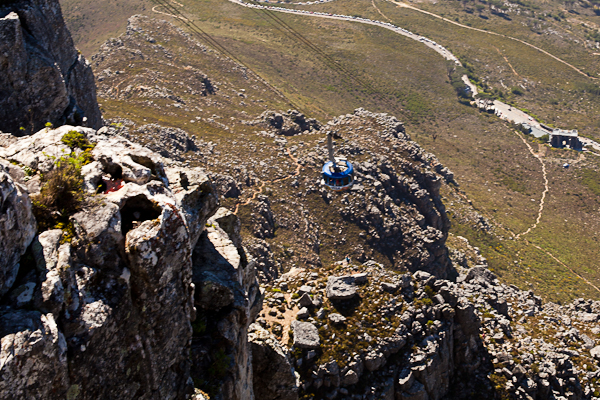 Next time, I’d consider taking the trek to the top on foot. It’s a haul, but we’re told it’s well worth the energy expenditure. If you don’t feel like using your legs to make the 3,000-foot ascent, there are plenty of hiking trails to stretch your legs atop the mountain. 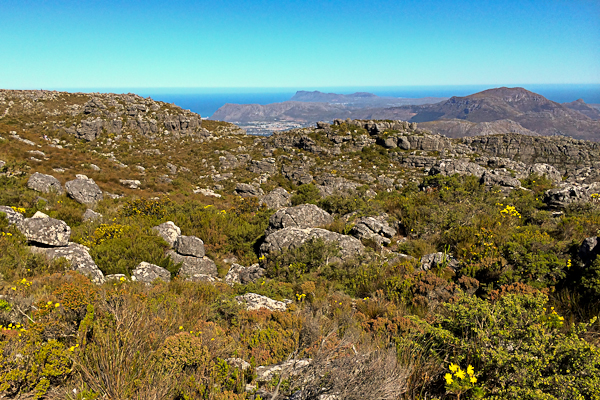 Thrill-seekers (not us) can rappel off the side of the mountain. I think dining at its mountain-top restaurant is more my speed of taking in the scenery – and it’s plenty exhilarating.

We got a brief taste of the walk we were missing when our guide dropped us off in front of the parliament buildings. 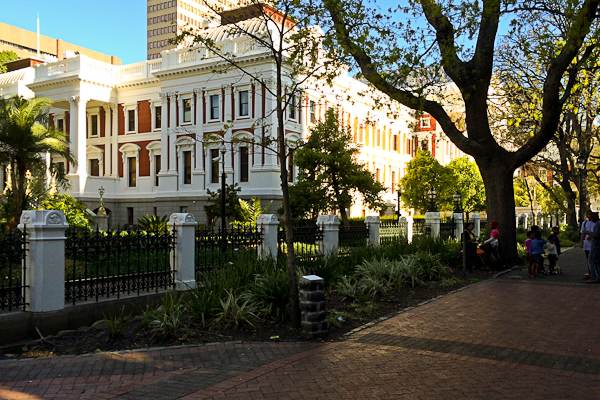 Path leading to the parliament buildings 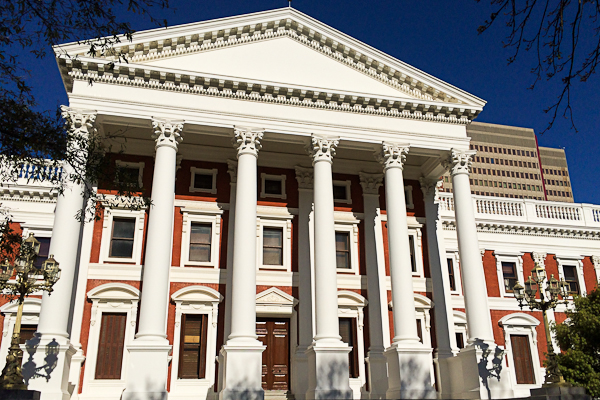 Tours of the parliament buildings are available. 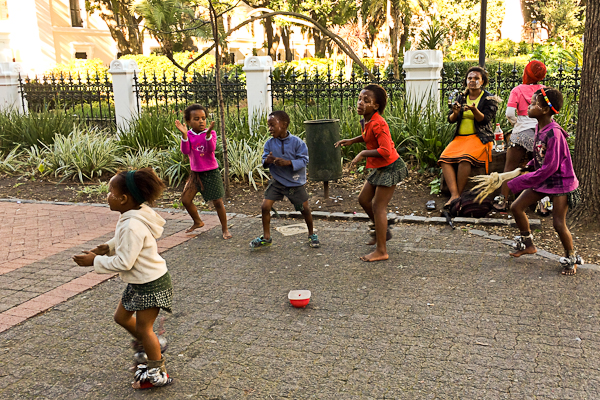 Enterprising entertainers and vendors of all ages are set up along the street leading up to the buildings.

On our driving tour, we also got to see the colorful Muslim neighborhood, Bo-Kaap, where we could hear the call to prayer, and trendy neighborhoods like De Waterkamp with a San Francisco feel. 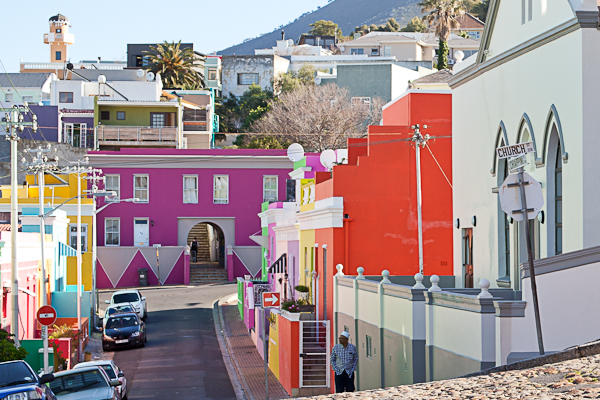 There are so many inviting neighborhoods that you could break up your days in Cape Town exploring each of them. Allow plenty of time to do just that.

3. Enjoy fine dining that won’t bust your budget. Cape Town dining is as spectacular as its scenery. The best part? It’s much cheaper than and equally impressive as the finest restaurants you’d find the United States and Europe.

We’re talking highly creative, world-renowned restaurants selling seven-course tasting menus with wine pairings for under $200 including tip. During our stay we dined at The Test Kitchen and The Greenhouse – two equally compelling and thrilling culinary choices. 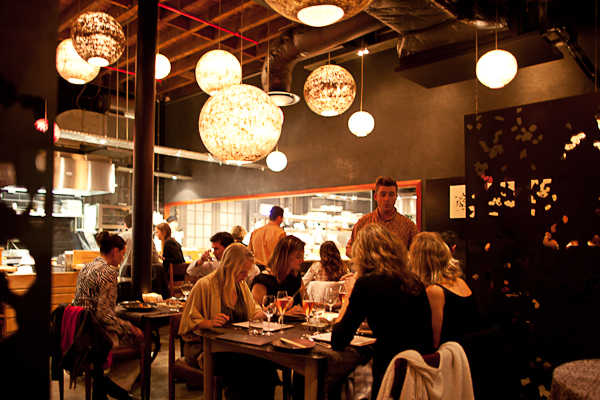 Prepare to be impressed. You'll need to book reservations at The Test Kitchen several months in advance. 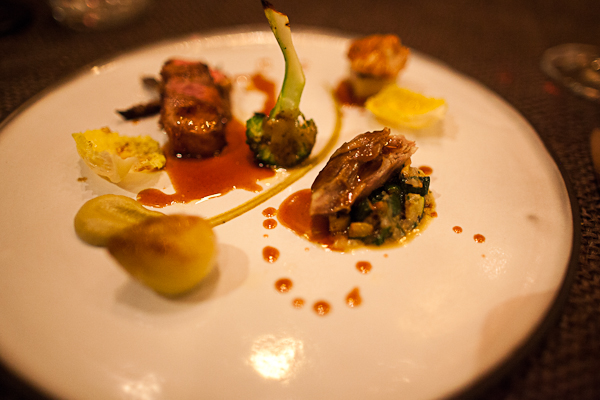 One of many full-flavor tasting courses at The Test Kitchen

Come hungry and don’t skimp on a single course. Go big or go home with the full tasting menus. You won’t be sorry – nor will your wallet.

We learned about Nelson Mandela’s 18-year stay and how he and the other imprisoned political leaders hatched their plans for a democratic South Africa. The most amazing part is we heard it firsthand, thanks to the tours being led by former prisoners. You can hear some of their stories online.

Combined with a visit to Johannesburg’s Apartheid Museum, this is an unforgettable walk into history.

5. Take the slow and scenic route around the Cape Peninsula. Whether you go it alone with a rental car or hire a guide, get a better perspective of Cape Town by driving the highly scenic peninsula to the Cape of Good Hope.

You’ll follow one of the most scenic drives, Chapman’s Peak, which was built in 1915 by convicts.

Along the way, you’ll pass glitzy neighborhoods like Clifton and Camps Bay, see shark spotters stationed at lookout points above the beaches, and spy plenty of signs warning you to keep your doors locked from resourceful and prying baboons.

As you approach the Cape of Good Hope, passing ostriches near the beach feels a bit surreal. 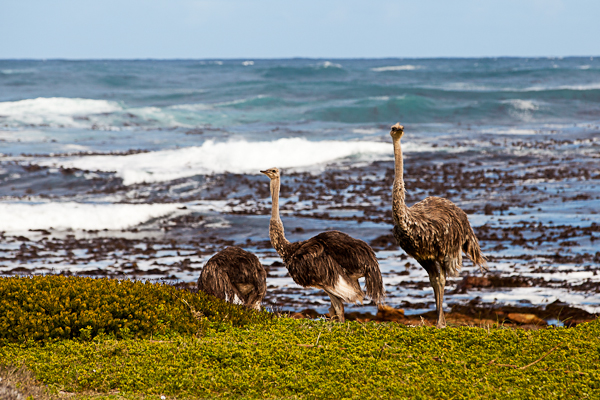 Then the ruggedness of the place hits you in gale force and sound as you step out of your car onto the kelp-filled beach of large, multicolored rocks. 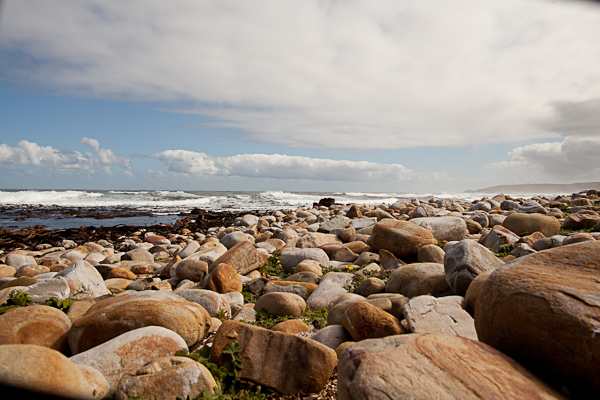 As waves bash against the beach, it’s easy to imagine why early explorers first named it the “Cape of Storms.” It later became known as the “Cape of Good Hope” by the Portuguese, depicting their the optimism of having a sea route to India and the East. 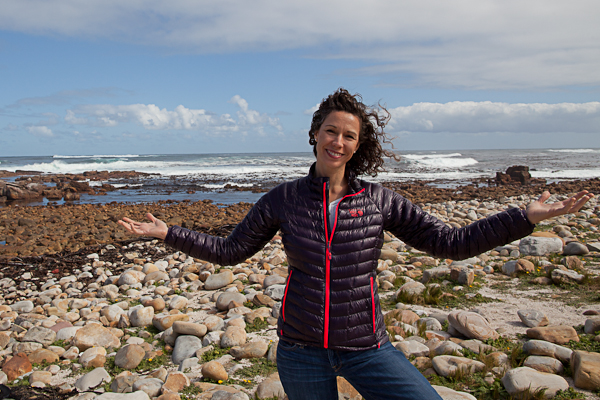 Wind-whipped – that's how I felt standing on the beach.

To get a better view, you can hike to the Cape Point Lighthouse, which was decommissioned for being built too high to provide any use. For proof, just travel along a special Shipwreck Trail designated on the Cape of Good Hope Nature Reserve.

If you don’t feel like that much walking, plan your trip around lunch at Two Oceans Restaurant for tasty seafood and fine views. 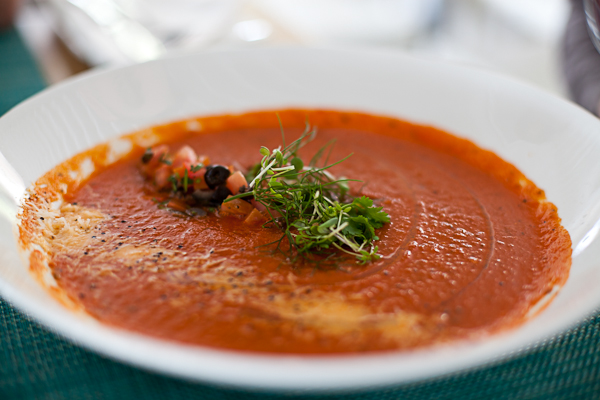 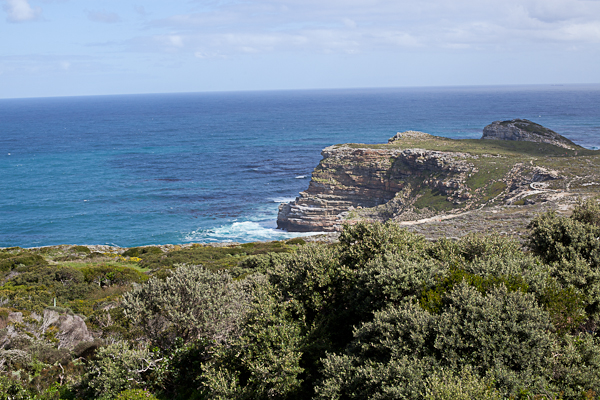 View of the Cape of Good Hope

6. Walk with the penguins. Penguins in Antarctica? That’s expected. Seeing these dapper birds on a beach in South Africa? That’s a treat. 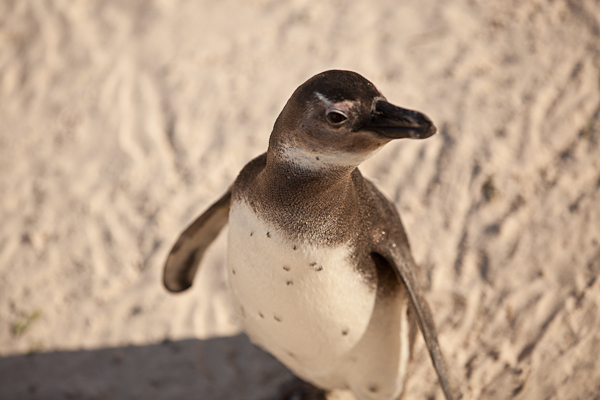 We found them at Boulders Penguin Colony in Simons Town during our peninsula drive. 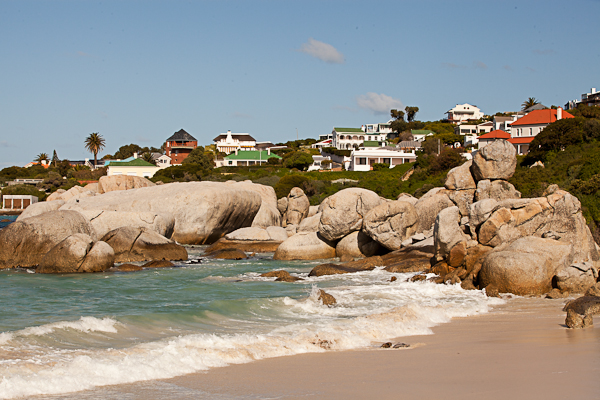 There’s something comical about watching these African penguins waddle on the beach and dive into the surf. A boardwalk gives you plenty of room to stroll and watch their lives unfold. It’s OK to blink. You won’t miss much. Life on the beach is pretty laid back and simple for these feathered fellows. 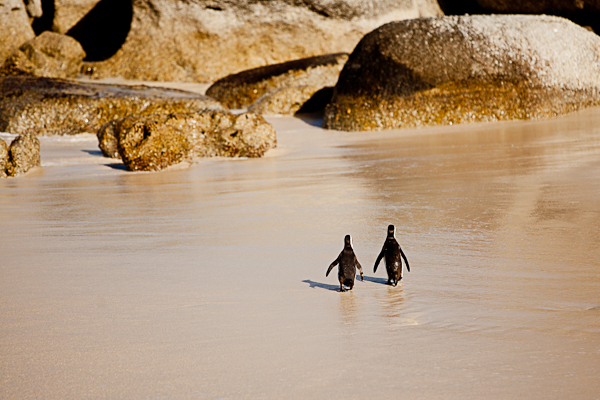 7. Stop and smell the flora. Seeing calla lilies in the wild is one experience I’ll always remember about Cape Town. For this Oklahoman, the only calla lilies I had seen before our visit were in a bouquet or vase – not the long-stemmed variety rising from the earth.

The Cape Floral Region is the smallest and richest of six floral kingdoms in the world. While it represents less than 1 percent of the entire African continent in terms of geography, it holds 20 percent of its flora. Besides calla lilies, geraniums, birds of paradise and pincushion flowers can be found growing here. 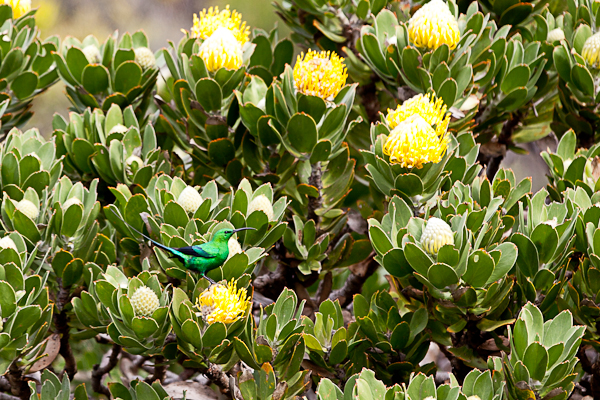 The Cape Floral Region is considered special enough to be named a UNESCO World Heritage Site – one of eight in South Africa. Robben Island also makes the list. So during your visit, take time to appreciate the surrounding flora.

8. Drink in wine country. We didn’t do near enough of this. 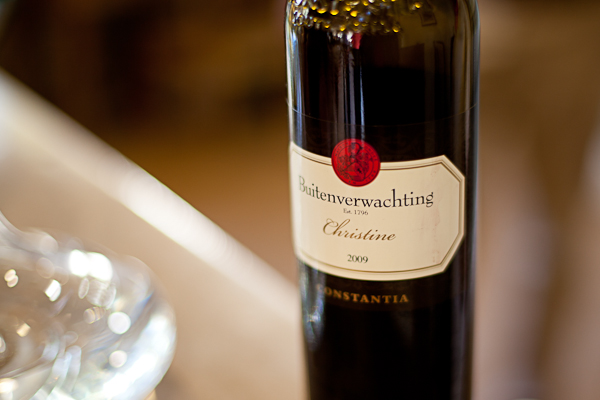 With only a few days in Cape Town, we stuck to the suburb vineyards of Constantia. 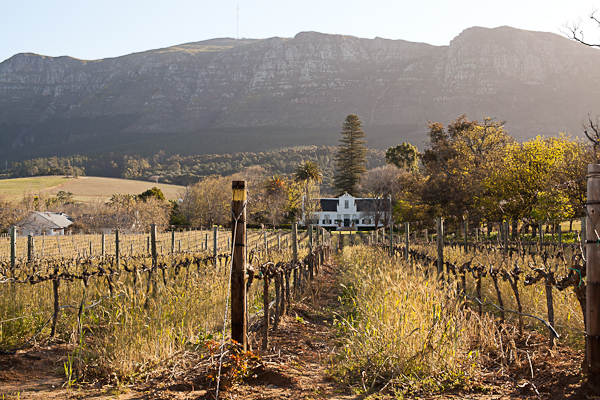 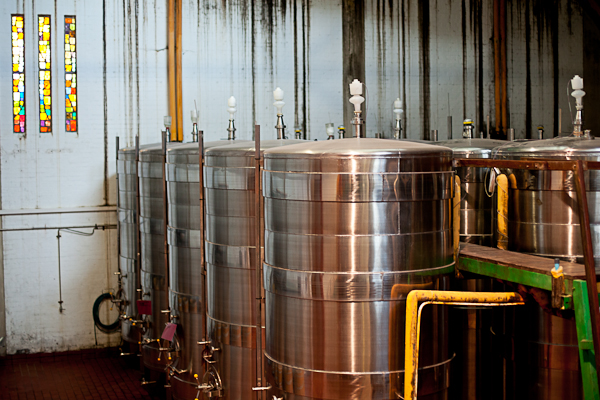 Insider's look at one of Constantia's vineyard operations

But there’s a whole big wine world within an hour of the city. The Stellenbousch, Helderberg, Durbanville Valley and Franschhoek Valley wine routes will be a part of our next visit. 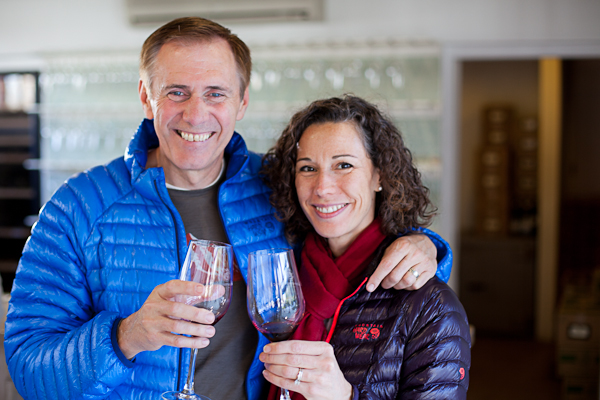 Drinking in Cape Town one experience at a time. There's plenty to cheer about in this sparkling city by the sea.

Quality time: How would you spend it?

The lesson of timing was painfully obvious after our first day of touring Cape Town. Two meager days aren’t enough.

I could spend weeks getting to know it by enjoying fine meals, exploring wine country, checking out the beaches and hiking its nature preserves. Even then, I’d just scratch the surface of what it has to offer. Taking the time to dig deeper likely would unearth even greater treasures.

What would you add to the list of experiences not to miss in Cape Town? What do you love about this city?

0 # G. Maria 2014-12-02 03:54
Really enjoyed reading this post, Susie. Your photos are gorgeous - and reminded me of a time when I lived in Joburg (during Apartheid). I went to Cape Town on holiday with my parents, and I remember the beauty of this area quite well. I hope to go back one day! Thanks.

Cheers,
G.
Reply | Reply with quote | Quote | Report to administrator
0 # Susie 2014-12-02 13:35
Thanks, G! Living in Joburg during Apartheid. Wow. It amazes me to consider it a part of our world's recent history. When you go back to Joburg, you must visit the museum as I'm sure you'd find it especially interesting.

By the way, I love your blog and look forward to keeping up with your travels!