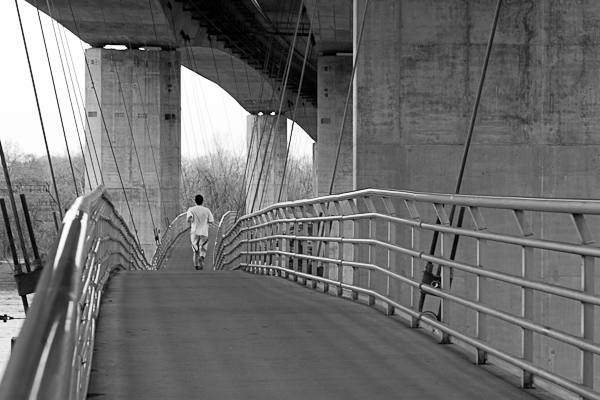 Finding an interesting path in Richmond, Virginia, is easy. Most roads lead to fine food, history and culture.

Two days is barely enough time to get to know Richmond, Virginia. Like a well-constructed tasting menu, the visit gave us just a few bites and left us wanting more.

By the time we left, we felt so at home in this city full of restaurants, history and culture, we decided it was definitely a repeat-worthy destination.

We thought Richmond seemed a natural starting point for our Civil War tour. During the battle, the city served as the capital of the Confederacy.

The former White House of the Confederacy, occupied by then President of the Confederate States of America Jefferson Davis, still maintains residence on a bustling patch of land in downtown Richmond. In fact, its backdoor is a stone’s throw away from a hospital’s emergency room entrance.

Despite having less than 48 hours in Richmond, we were able to see a lot of this city of just over 200,000 people.

Home to Virginia Commonwealth University (VCU), the state’s largest university with more than 31,000 students, parts of Richmond have the feel of a progressive college town. Its artsy vibe is well-earned considering VCU ranks as the United States’ No. 1 public graduate arts program, according to the university’s website.

While Richmond is full of Civil War history, its Revolutionary roots are equally fascinating. This is the town where Patrick Henry encouraged the colonies to separate from the British with his famous “give me liberty or give me death” speech.

The city also boasts having the first American hospital and U.S. canal system, as well as the nation’s first African-American governor, as advertised on the Richmond Region Tourism website.

The grandeur of historic Richmond smacked us in the face as we entered The Jefferson, a finely refurbished hotel that served as our home for the next two nights. 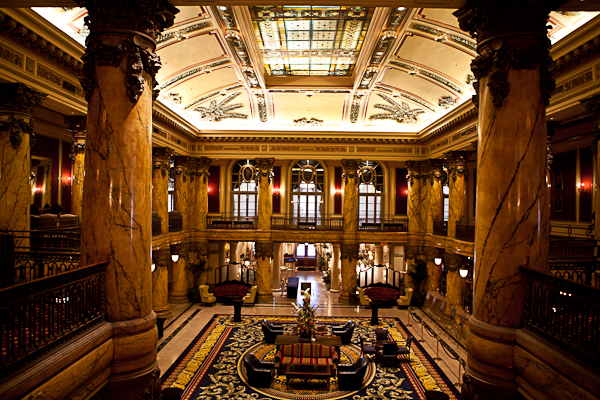 One of several grand lobbies in The Jefferson 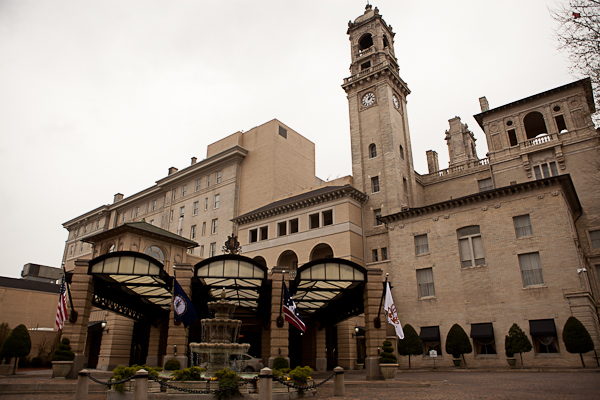 Exterior view of The Jefferson

With an opening that dates back to 1895, The Jefferson has a rich and colorful past, which includes keeping guests’ alligators in its marble fountain. You’ll still find bronze statues of the critters throughout the hotel as a reminder of those more exotic days. 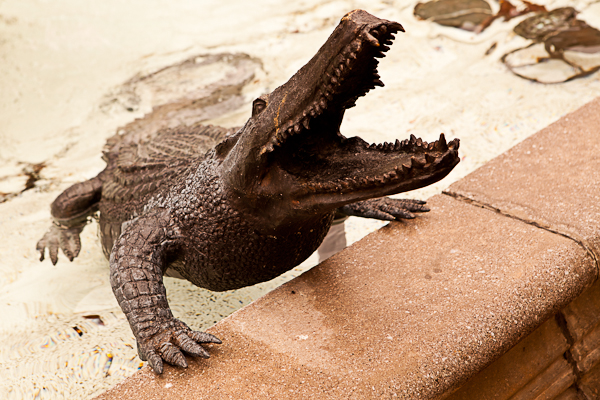 Alligator crossing at The Jefferson

We began our full touring day at the Virginia State Capitol. Even on a rainy day, the stark white building shines like a beacon on the hill. 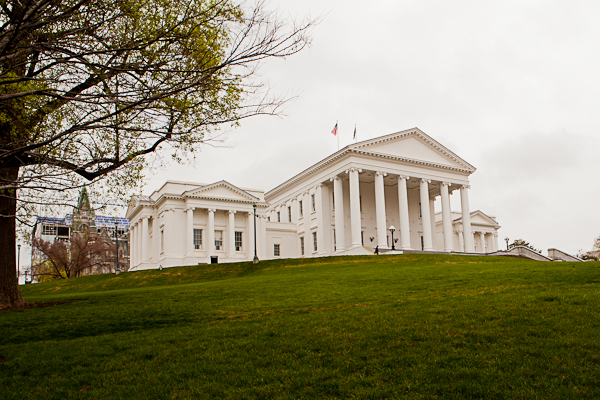 Thomas Jefferson designed the Capitol, making it the first public building in the New World built in the monumental classical style. It became the blueprint for many other capitols, courthouses and city buildings to come over the next several hundred years.

Plan your Capitol visit around seeing the “Keepers of the Flame” film to learn more about Virginia’s vital role in America’s formation and governance. Even better, take a guided tour. The guides bring history to life with stories on all that has transpired in the Capitol rooms and corridors.

Statue of General Robert E. Lee stands where he accepted leadership of Virginia's armed forces in 1861.

Inquisitive students listen to a guide share Capitol stories in the Old Hall of the House of Delegates, where members gathered between 1788 and 1904

At the Capitol, you’ll also find the only statue of George Washington for which he modeled. 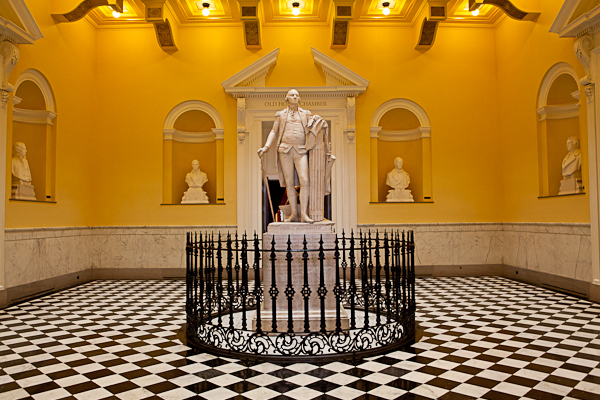 While the Capitol is a symbol of the country coming together, the White House of the Confederacy illustrates a point in time when our country was falling apart. 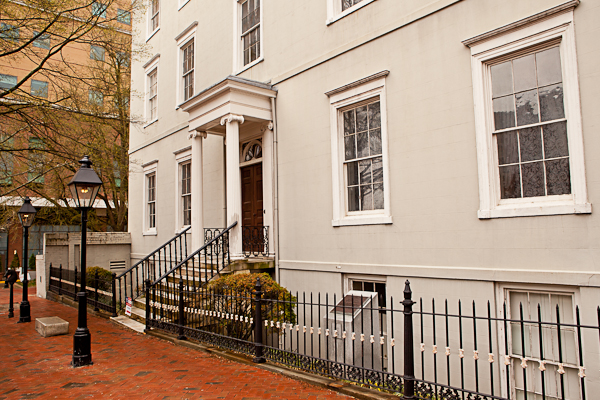 Front of the White House of the Confederacy

We were riveted by the stories of life in this home. They included not only important meetings between the Confederacy President Jefferson Davis and General Robert E. Lee, but also Davis’ six children scampering throughout the house. Most of his children lived short lives, including his 5-year-old son who died after falling from the white house’s balcony.

At the American Civil War Center, we got three points of view – Union, Confederate and African-American – of the conflict. It’s easy to spend hours here getting a grasp of the events leading up to and the scale of the Civil War. 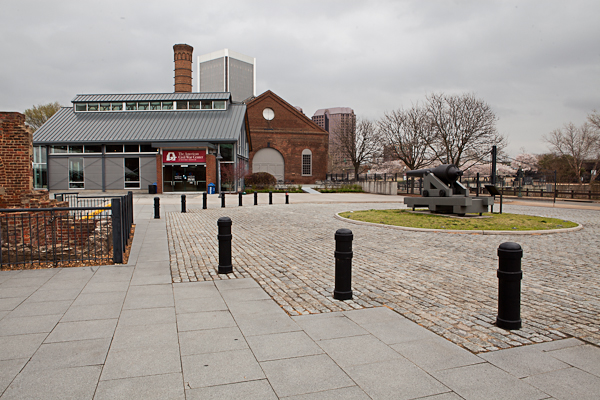 We wrapped up our tour with a walk to Belle Isle on its pedestrian bridge anchored below the freeway. Surrounded by the James River, Belle Isle served as the Civil War prison for captured Union soldiers. Now, it’s the city’s recreational hot spot with runners and cyclist taking advantage of its paths and views. 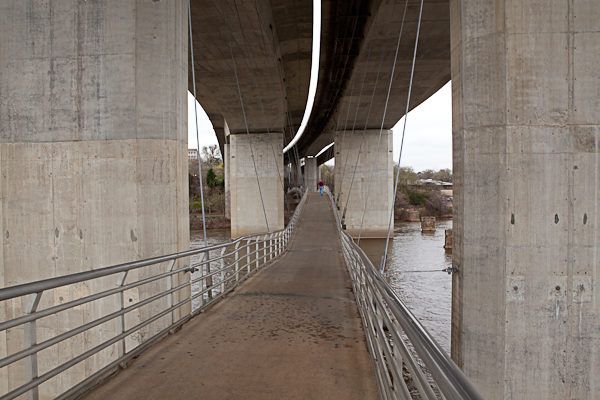 This pedestrian bridge crosses into Belle Isle, where thousands of Union soldiers were imprisoned during the Civil War. 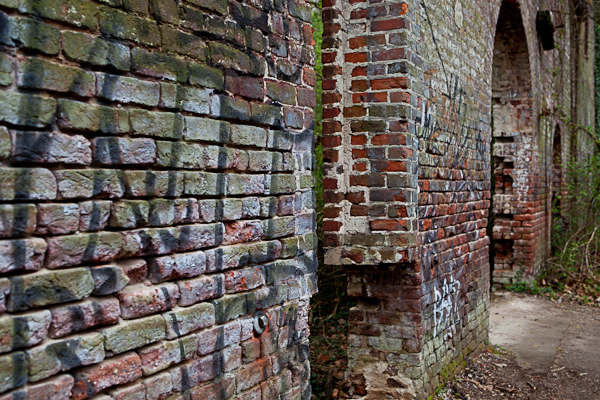 During most of the 1800s, carts of scrap iron passed through these arches of a milling manufacturer on Belle Isle.

Excellent dining options are just as plentiful as Richmond’s other attractions. Our best lunch choice ended up being Terrant’s Cafe, just a few blocks from our hotel. 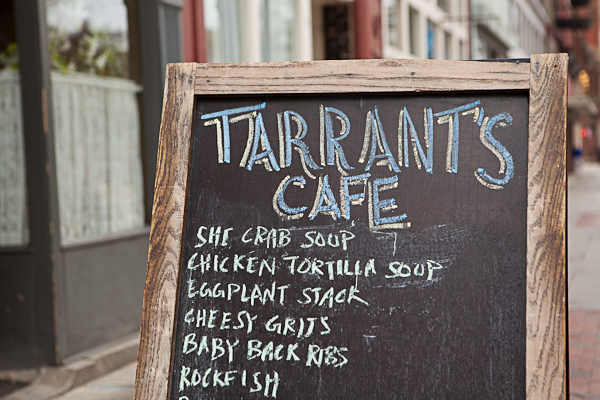 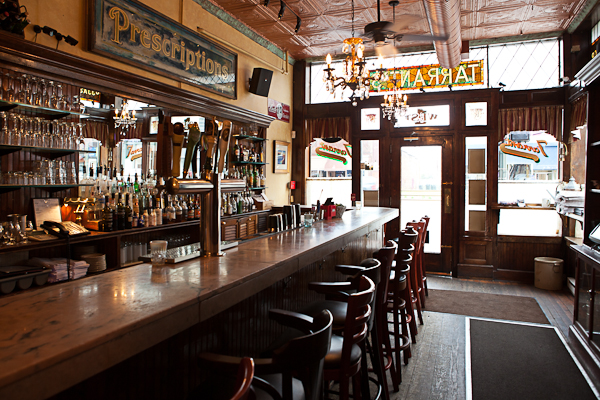 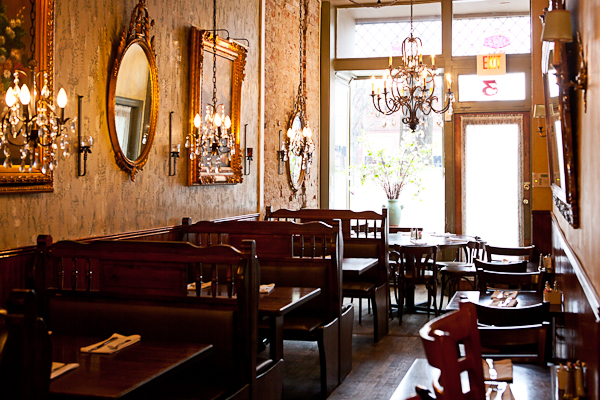 We started with the she-crab soup served with crusty garlic bread oozing with oil. 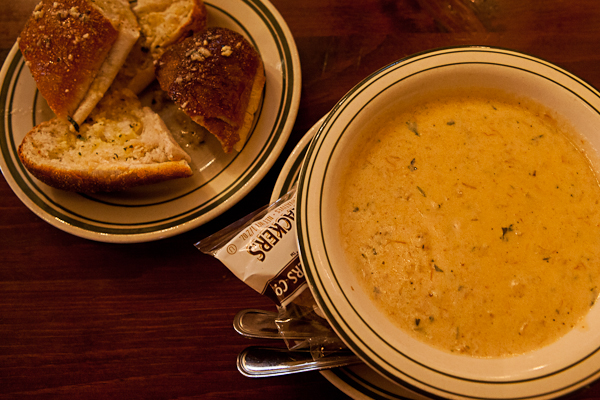 The “she” at the table liked it very much, especially the sherry and bay leaf flavors that melded beautifully with the creamy crab base.

I like chicken salad, but it’s hard to make it seem special. Terrant’s tarragon chicken salad with a hint of honey and golden raisins turned what seemed to be a pedestrian dish into a gourmet experience. 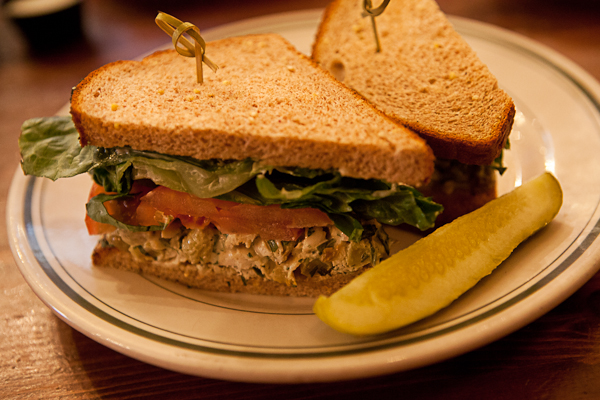 An even better choice was my husband’s pulled pork barbecue sandwich. Leftover rib meat covered in coleslaw and cheese was anchored together by two buttery crisp Texas toast slices. Add to that the melt-in-your-mouth onion straws to complete the scene of decadence. 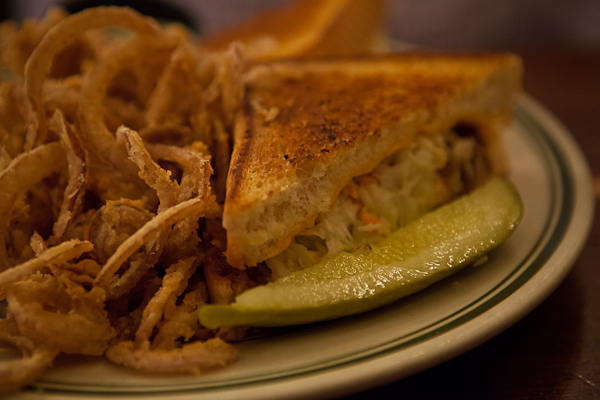 We ended our Richmond culinary journey on an even higher note with dinner at Heritage. 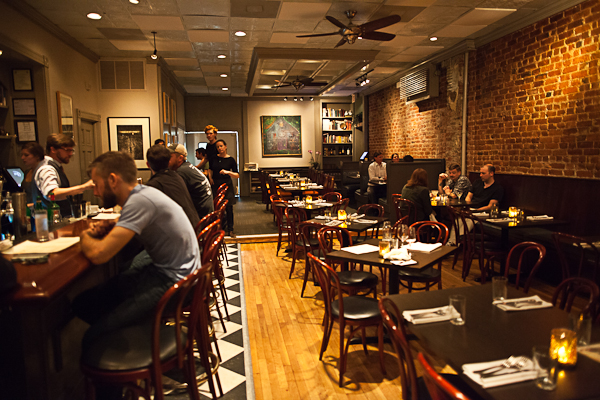 Our waitress recommended a few favorites, which included a starter of fried broccoli with Japanese mayo and some of the best pork belly we’ve ever eaten. 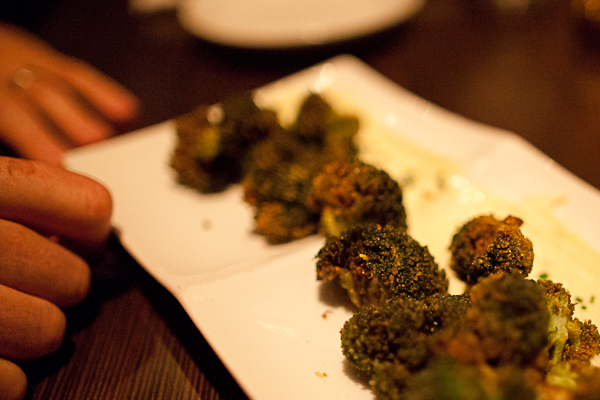 Sorry to admit it, but we’ve eaten a lot of pork belly so that’s saying a lot.

They call it the bourbon barrel-smoked pork belly. I call it simply delicious. 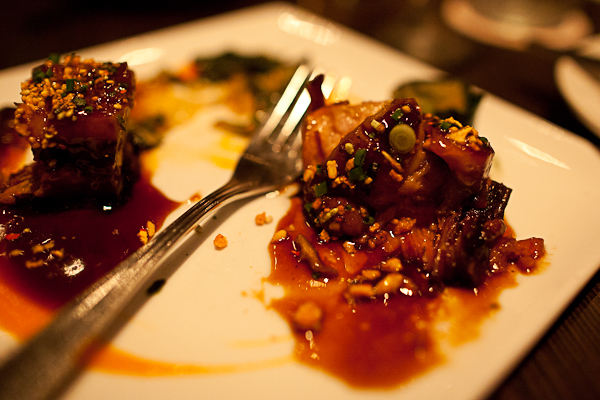 Fortunately, the sharing of dishes is encouraged, so we sampled three more – the beet salad with burrata cheese, Sicilian pistachio and rhubarb mostarda; homemade garganelli pasta (a first try for me) with mushrooms, soft poached egg, Parmesan cream, and asparagus; and a grand finale of chocolate concoctions. 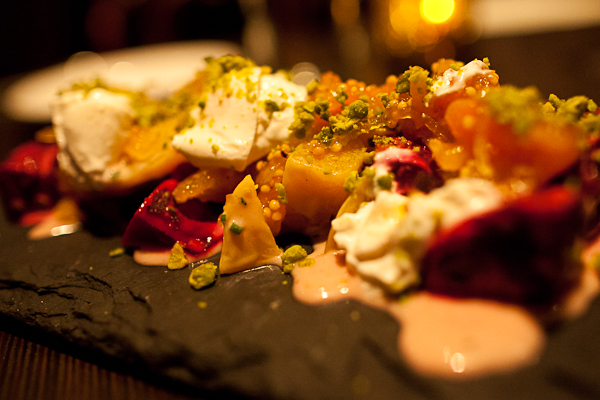 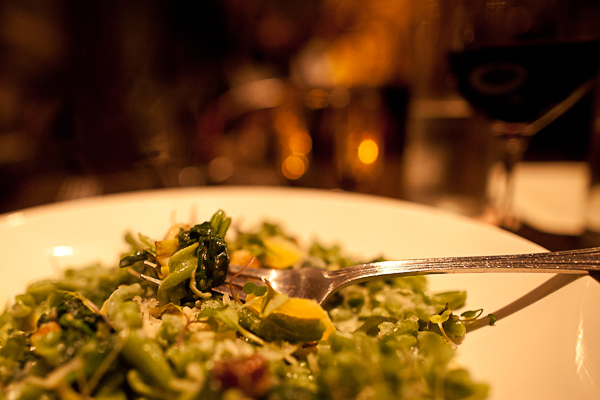 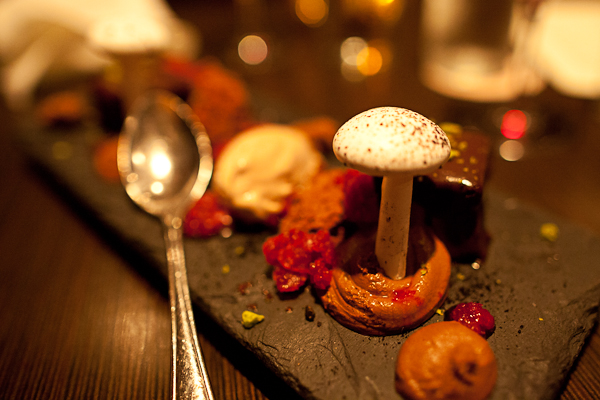 Richmond ended up being a great starter course for our road trip. With a taste for this city well placed in our memories, it’s a worthy contender for another long weekend in our future.