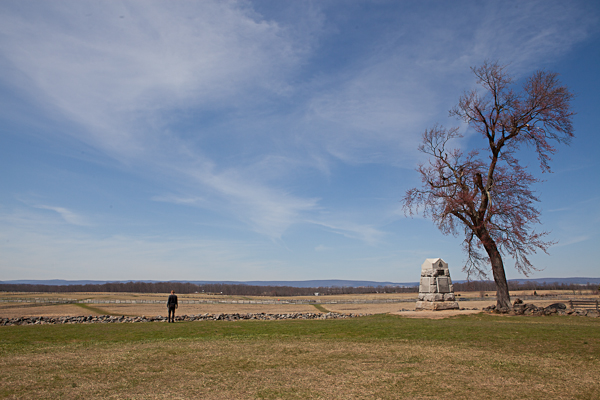 For perspective on the sacrifices made to take American freedom to the next level, visit Gettysburg. It’s an interactive Civil War history lesson that sucks you in with each story of triumph and defeat.

Gettysburg, Pennsylvania, marked the final stop on our weeklong Civil War Tour. It was a fitting ending to a meaningful and unforgettable road trip.

The battle at Gettysburg was one of Civil War’s bloodiest, covering three days and resulting in some 51,000 casualties. That’s about as many casualties over three days as the United States suffered during the entire Vietnam War.

Gettysburg’s 10-road network made it of strategic importance for both sides. Confederate General Robert E. Lee also wanted a victory on Union turf to give battle-worn Virginia a break and pressure the North to end the war sooner than later.

The Union’s defeat of the Confederacy at Gettysburg marked the North’s turning point toward victory. This win put the United States one step closer to ending slavery once and for all.

With each new Civil War fact uncovered, I found myself wanting to dig deeper to understand the time, place and people.

Before stepping onto the battlefield, get oriented at the Gettysburg National Military Park Museum and Visitor Center.

Start with the Morgan Freeman-narrated film, “A New Birth of Freedom,” followed by the Gettysburg Cyclorama depicting Pickett’s Charge that ended the bloodbath.

The restored cyclorama takes you back to the pre-film cinema experience in the 1800s, when this popular form of entertainment helped put you in the center of a scene. The 360-degree, 42-foot-tall, 377-foot-long oil painting is souped up with sound effects and lighting, giving a powerful snapshot of a time and place. 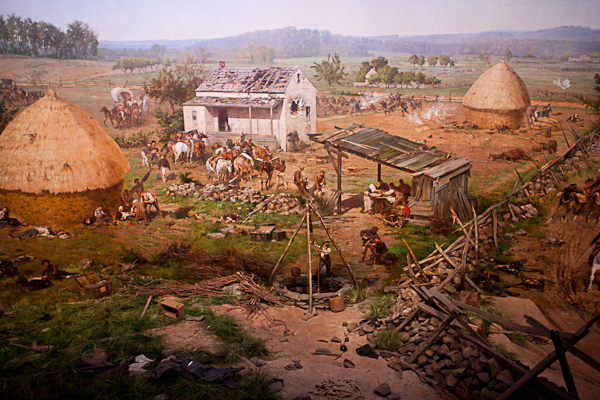 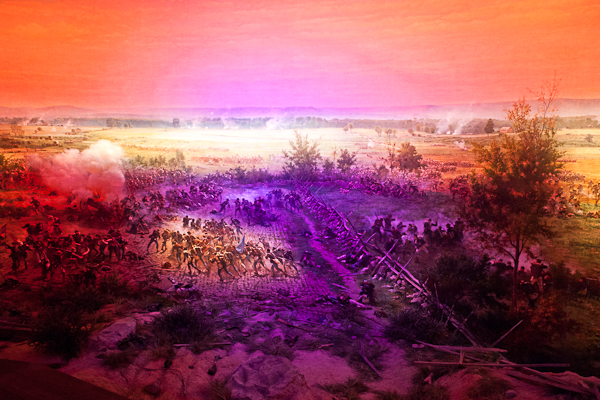 Colored lights and sound effects add drama to the cyclorama.

French artist Paul Philippoteaux, a professional cyclorama painter and artist, visited the Gettysburg battlefield in 1882. He spent weeks onsite with his sketchbook to help him produce the massive painting.

Look closely at the cyclorama to find President Abraham Lincoln in the scene. Philippoteaux included him as a special tribute. 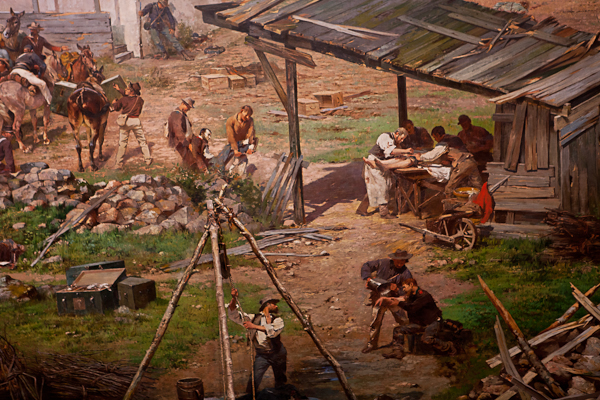 President Lincoln is the man being carried by two men in the center of the photo.

After you leave the cyclorama, proceed directly to the museum and prepare to be completely engrossed. Facts and figures are supported with lots of artifacts to bring the battle to life. Recordings of voices defending the Union and Confederate sides of various Civil War issues help you get into the mind-set of the time.

Displays of Confederate and Union soldier uniforms, as well as their campsites, give you a sense of what it was like to live the war. Video illustrations and narrations give you a sense of place and help you piece together how the battle unfolded over the three days. 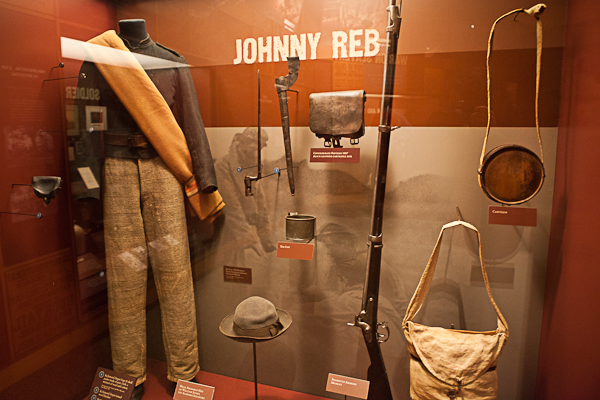 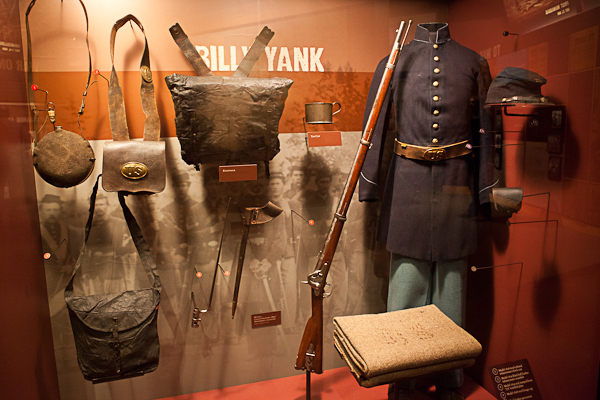 A visit to the museum is a must-see to fully appreciate the battlefield.

Filled with facts, figures and a feel for the flow of the battle, you’re ready for the field.

I’d recommend coming into Gettysburg by early afternoon to see the museum. Then get an early start the next day with a battlefield tour.

Whatever you do, hire a guide through the National Park Service.

If you’re lucky, you’ll get a guide as special as our Ted. As soon as we handed over the keys to our car and launched out of the parking lot, he unwound the story of Gettysburg with the passion of an eager and precocious schoolboy and the education of a longtime Civil War buff.

Ted tells us he caught the Civil War bug when he first visited Gettysburg as a 10-year-old. That’s when he knew what he wanted to do for the rest of his life.

A 30-year career in the steel industry temporarily derailed his true calling. But upon retirement from his job in Pittsburgh, he packed his bags, moved to Gettysburg and became a full-time licensed battlefield guide. The rest is history.

Ted shares his knowledge and passion conducting between 300 and 400 tours a year. Becoming a licensed battlefield guide requires acing a written test and oral exam where the candidate gives a tour.

What sounds rigorous, he calls worthwhile and a good time. 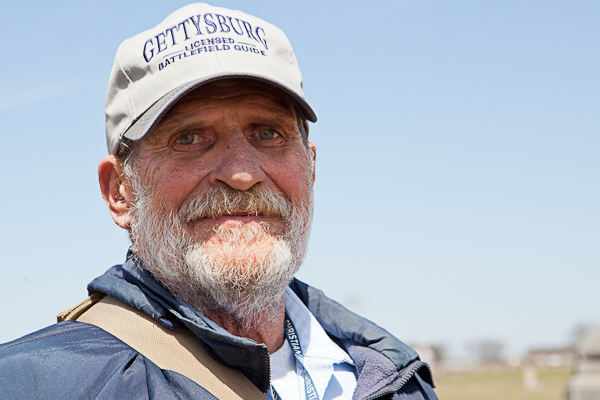 That became obvious as we stopped to learn about what made each spot significant. Seminary Ridge, Barlow Knoll, The Wheatfield, The Peach Orchard, Little Round Top and Cemetery Hill – each place on the map told a story of calculated risks and decisions with outcomes of success and failure depending on your side of the war. 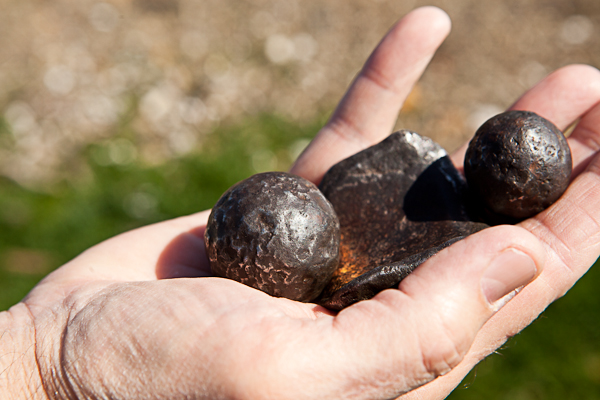 Hard to imagine this canon shot raining down on soldiers.

Interestingly, we learned that while sides mattered on the battlefield, recovery was all American. Both Confederate and Union wounded soldiers shared makeshift hospitals set up throughout Gettysburg.

As you drive through the battlefield, there’s no doubt you’re treading on hallowed ground.

More than 1,300 monuments, historical markers and memorials adorn the battlefield to honor states, military units and individuals. There’s nothing like a monument every block to drive home the stakes and interests in this historic battle. 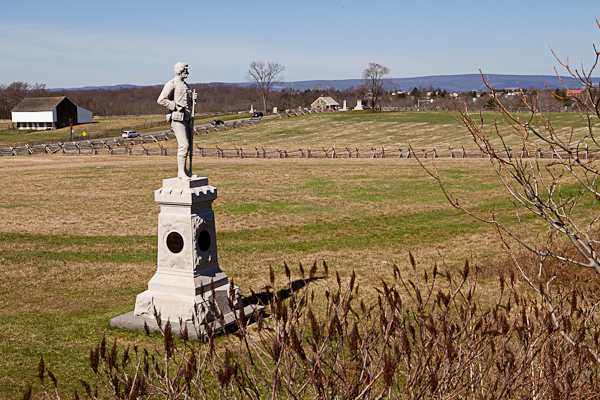 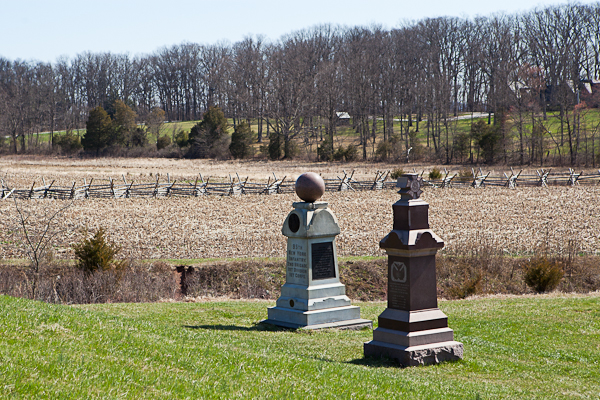 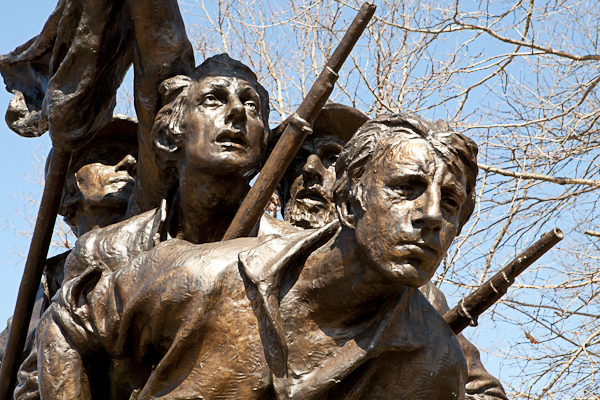 The North Carolina State Monument marks the spot where the its soldiers began their part of Pickett’s Charge. 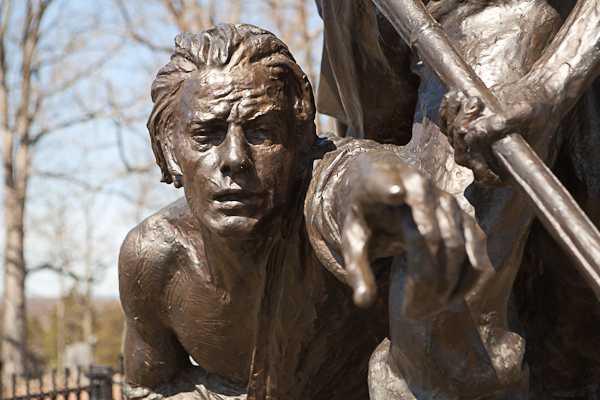 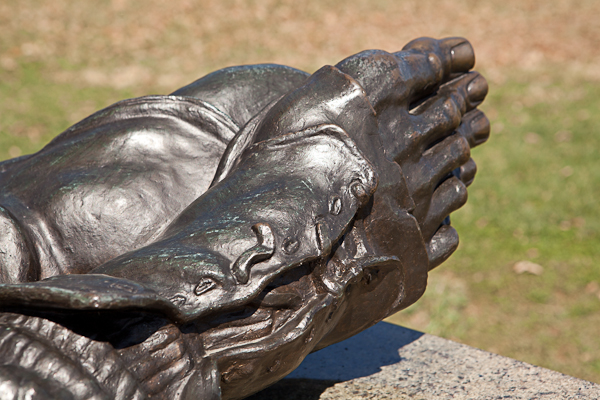 As a part of the Louisiana State Monument, worn shoes illustrate a small fraction of the hardships faced by Civil War soldiers.

The Eternal Light Peace Memorial, which veterans dedicated to “peace eternal in a nation united,” left a lasting impression on Jacqueline Kennedy when she and her husband visited Gettysburg. She incorporated the eternal-flame concept into the design of President John F. Kennedy’s gravesite at Arlington National Cemetery. 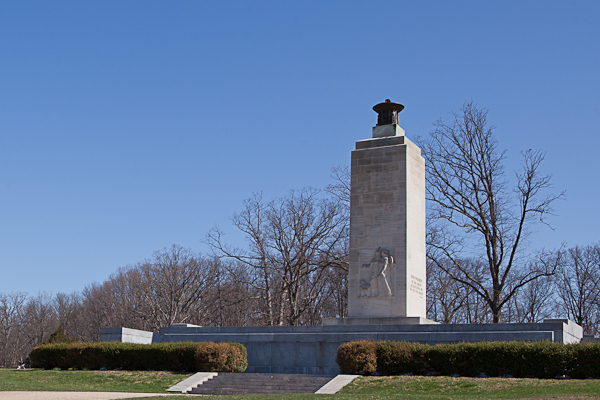 Standing atop Little Round Top, Ted painted a vivid picture for us of Confederate troops unsuccessfully charging the strategically important hill for the Union. An earlier decision that defied a direct order led to the Union's fortification of the hill. 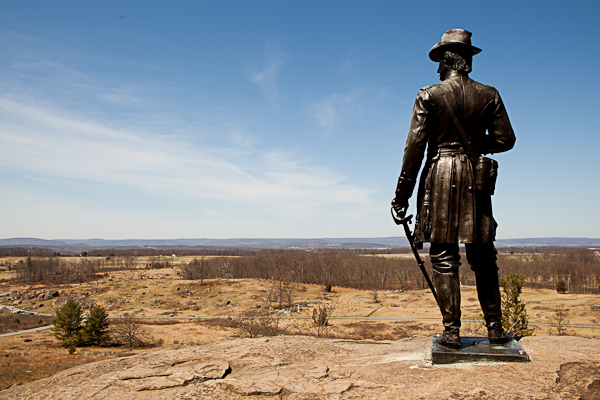 Statue of the man, Major General Gouverneur K. Warren, who defied orders and saved the Union’s key position at Little Round Top. 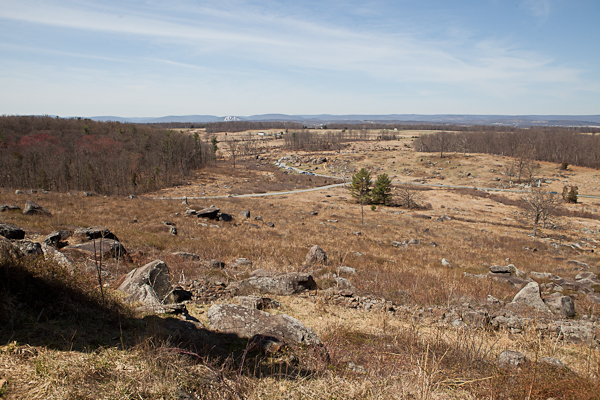 Looking down from Little Round Top 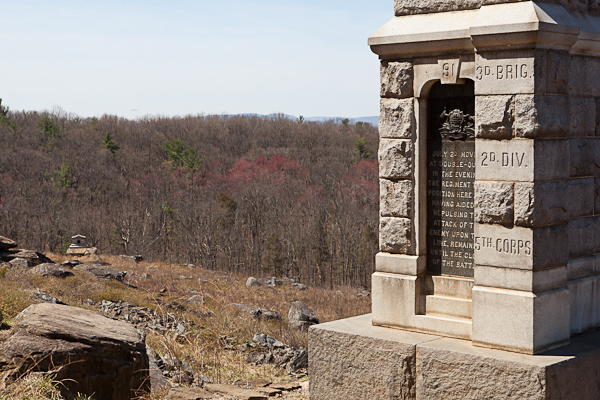 Another monument atop Little Round Top

Five minutes could have changed world history, Ted pointed out. Without the United States’ unification, we might not have turned into the industrial powerhouse that helped defeat Germany during World War II. Nazi swastikas might be waving on our lands instead of the red, white and blue. Freedom could have fallen from our grasp.

While it may sound far-fetched as we sit in the comfort of our homes and enjoy the freedom to roam our lands, the point wasn’t lost on us.

A trip to Gettysburg isn’t complete without paying your respects at Soldiers’ National Cemetery and standing on the ground where President Abraham Lincoln delivered his famous speech.

The carnage at Gettysburg led to hastily dug graves. Four months later, land had been purchased for the proper burials of Union soldiers. Before the end of the war, thousands more would join their fallen comrades. After the war, Confederate soldiers would be moved from the battlefield to cemeteries in the South. 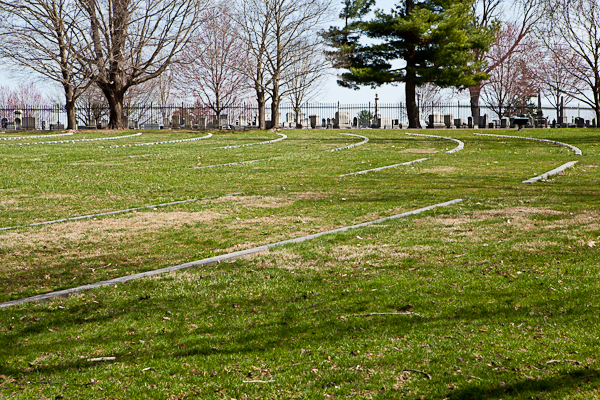 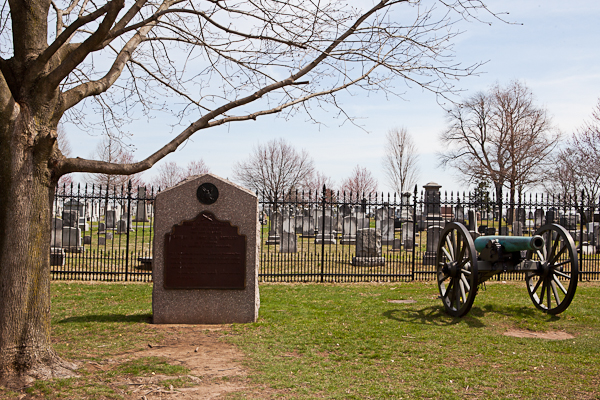 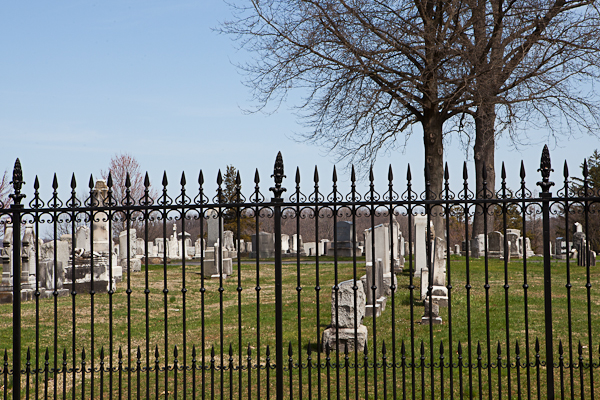 On Nov. 19, 1863, President Lincoln arrived to dedicate the cemetery. The principal speaker, Edward Everett, first delivered a two-hour speech. Lincoln followed with 272 words that took about two minutes to deliver.

The Gettysburg Address continues to remind generations of the sacrifice and responsibility that comes with freedom.

As we wrapped up our tour where the battle ended with Pickett’s Charge, Ted brought home all we had seen as he read a beautiful poem he had written after 9/11. It was the perfect ending to a historically rich day.

We parted with hugs, thankful for the experience of Gettysburg and a great man to guide us through it.

Preparing for your Gettysburg experience

The details of Gettysburg are what make it most interesting. Doing a little research before the trip will help you dive in and fully appreciate the experience.

Check out these excellent resources: