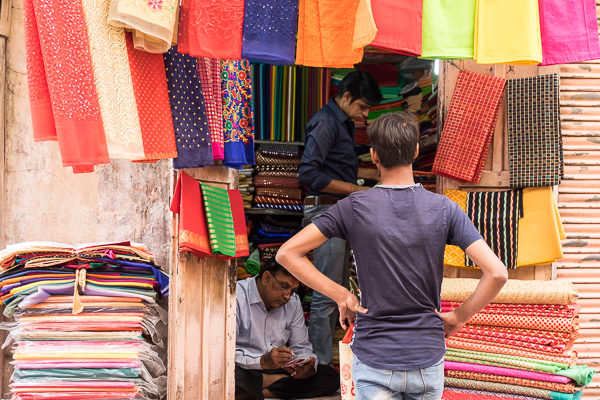 We weren’t sure what to expect from India’s “Pink City.” Jaipur, India, got its name from the distinctly colored buildings painted to resemble red sandstone. For good measure, the city later repainted the town in the same rose tone to impress the Prince of Wales during a visit in 1876.

For us, the color paled in comparison to the more vibrant city tucked past its larger tourist stops.

Built in the 18th century as India’s first planned city, Jaipur is the capital of Rajasthan. It also is the state’s largest city with about 3 million people calling it home.

Maharaja Sawai Jai Singh founded the city to become the new state capital, which moved from Amber. Amber is now known is Amer and considered a part of Jaipur.

We visited Amer Fort to see how Indian royalty lived in the 1600s until 1727 when the capital moved to Jaipur. They lived well, with plenty of fortifications and walls to protect them. Inside, comfort and beauty reigned supreme with beautiful gardens, lattice screens, decorative mirrored ceilings and other artistic details etched throughout its courtyards. 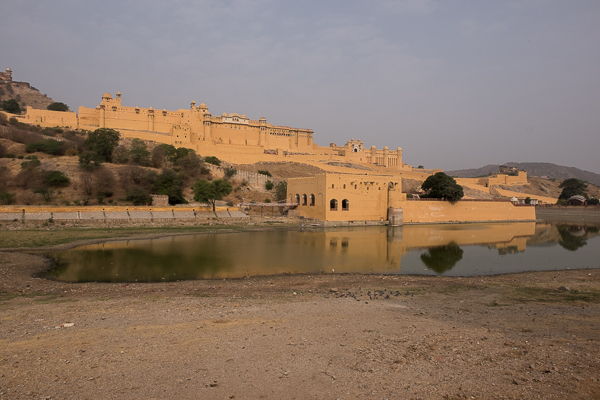 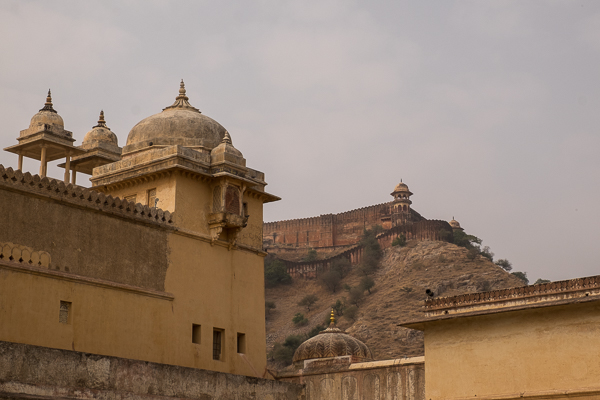 Protective walls can be seen in all directions outside Amer Palace.

Ganesh Pol is the entrance into the private quarters of the maharajas. It is named after the Hindu god Ganesh, who is responsible for removing all obstacles in life. 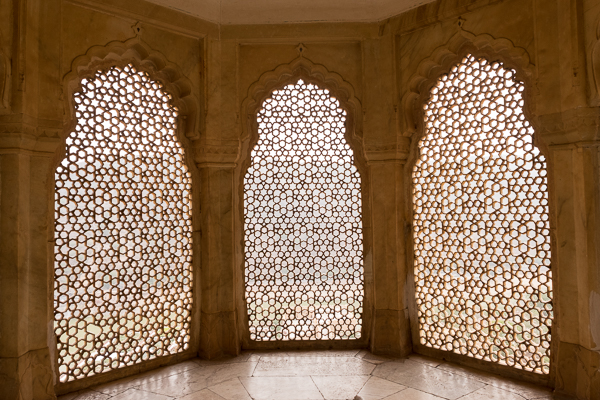 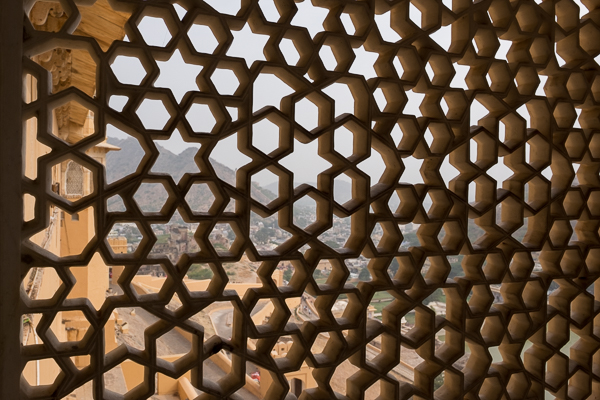 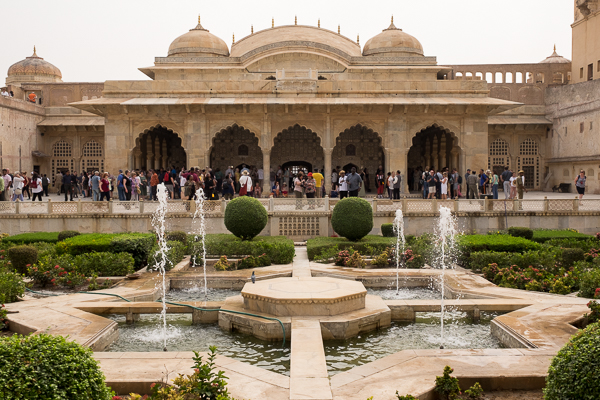 Jai Mandir, the private residence of the maharaja 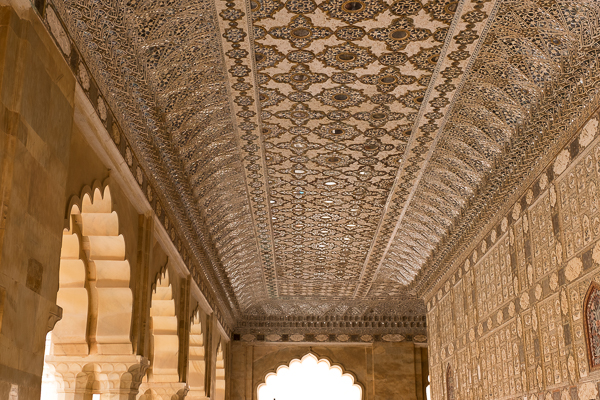 Walking inside Jai Mandir is pure delight. Also called the mirror palace, its mirror mosaics and colored glasses were described as a "glittering jewel box in flickering candlelight." 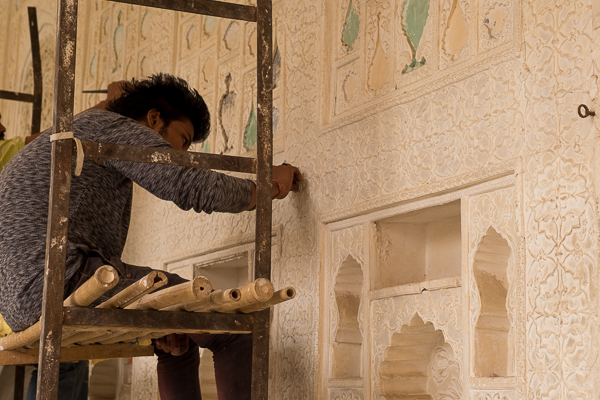 The palace is in need of lots of TLC. Restoration work continues throughout to bring it back to its early-day splendor. 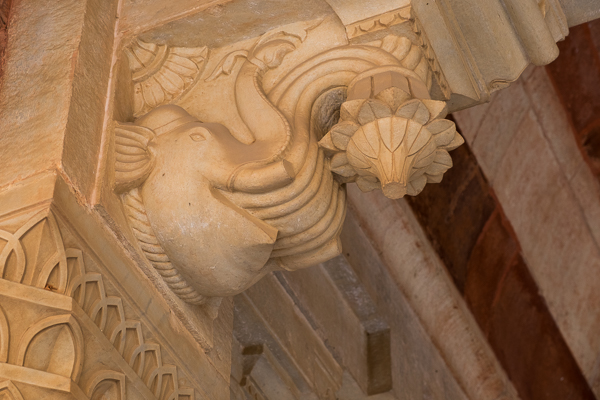 There are lots of details to pay attention to when visiting the palace, such as this marble elephant atop one of its columns.

During our visit to Jaipur, we also saw the City Palace complex that is still partially used as a royal residence and an 18th-century open-air observatory. 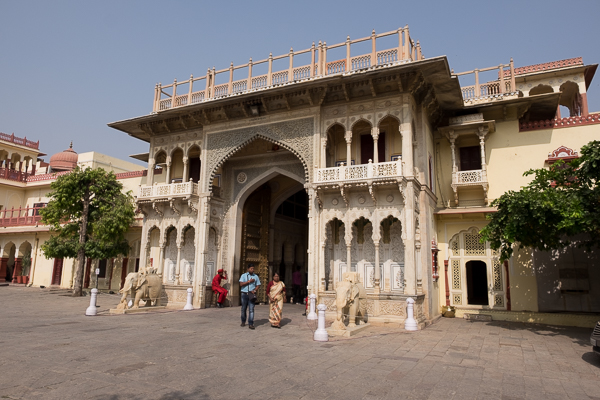 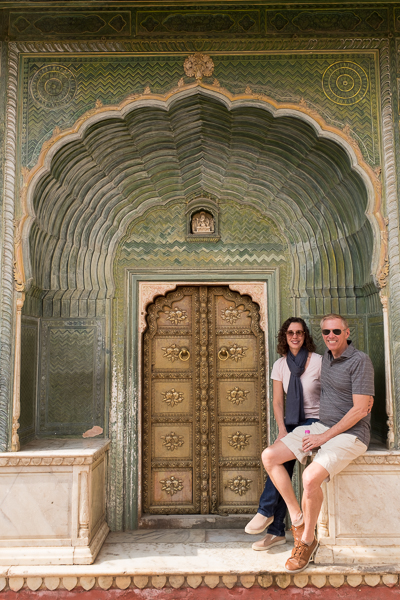 An alcove inside a courtyard of City Palace 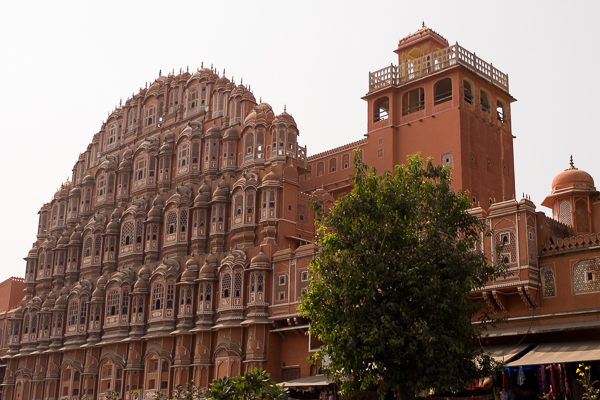 A later addition to City Palace, Hawa Mahal (Palace of Winds) has 953 small windows decorated with latticework. The original intent of the lattice design was to allow royal ladies to observe everyday life and festivals celebrated in the street below without being seen. 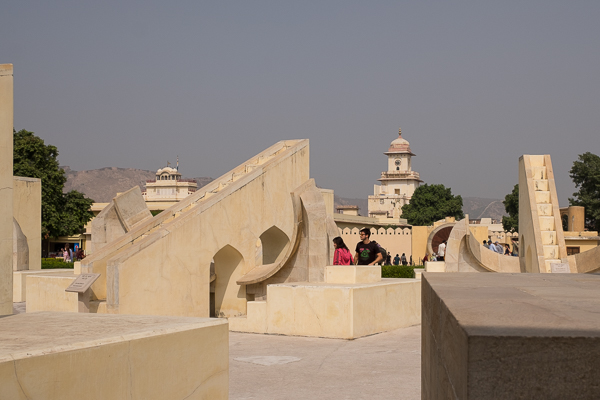 Jantar Mantar, an 18th-century open-air observatory, features the world's largest stone sundial. This collection of 19 architectural astronomical instruments is impressive when you consider they were built in 1734.

With the tourist sights checked off of our list, we ventured further into the streets of commerce just off the main drag of the City Palace. This is where we found the more colorful side of Jaipur as we watched store merchants wedged in narrow stalls make their livings.

When touring Jaipur, visit the sights. Soak in the history. But don’t miss those everyday-life interactions that give greater perspective to the city. Just like a kaleidoscope, it’s the smaller pieces that come together to tell a more colorful story. 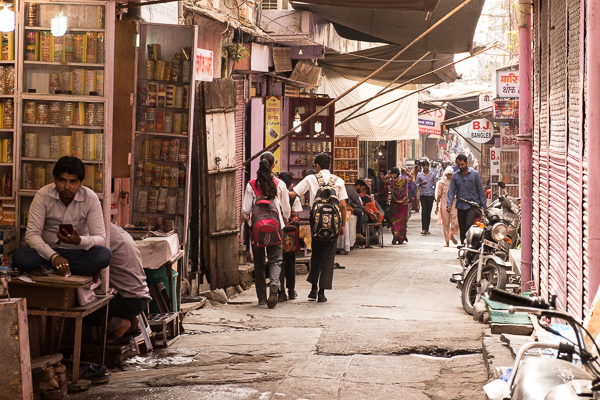 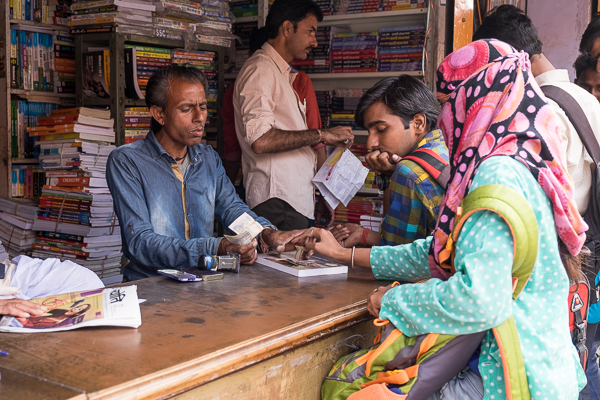 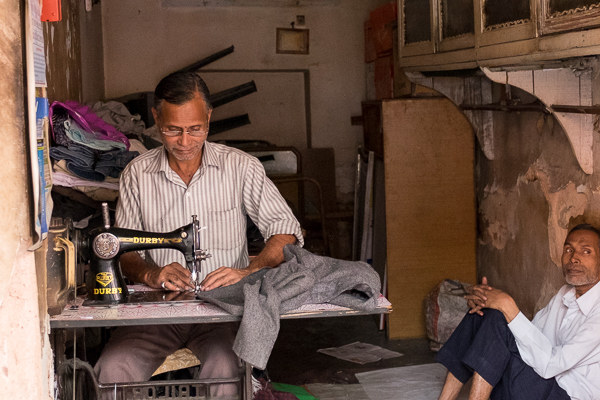 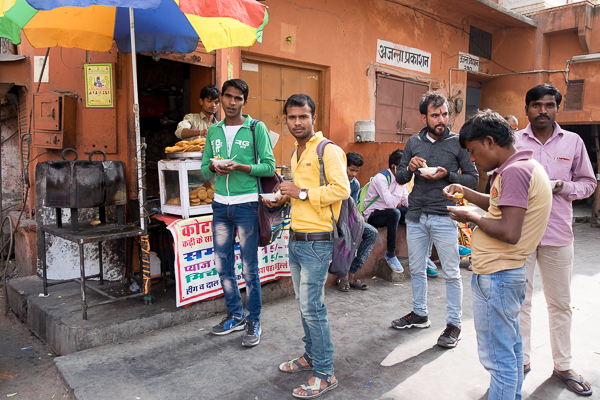 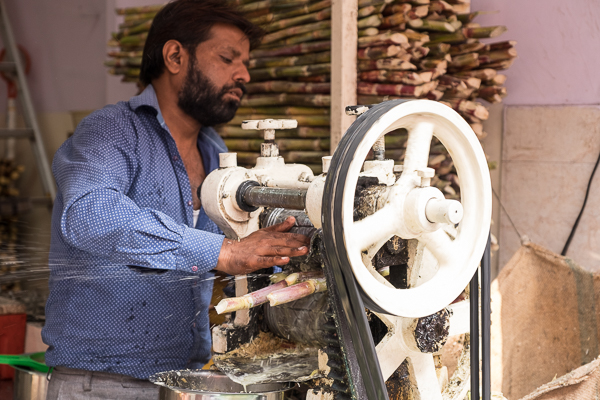 This was the first time I had seen a sugarcane juicing operation. 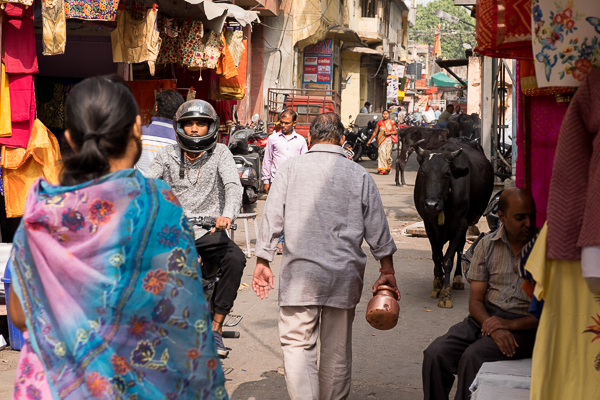 Man, woman and cow – they all share the right-of-way.

Family and friends huddled together reviewing fashions was a common scene we ran across in the shopping district. 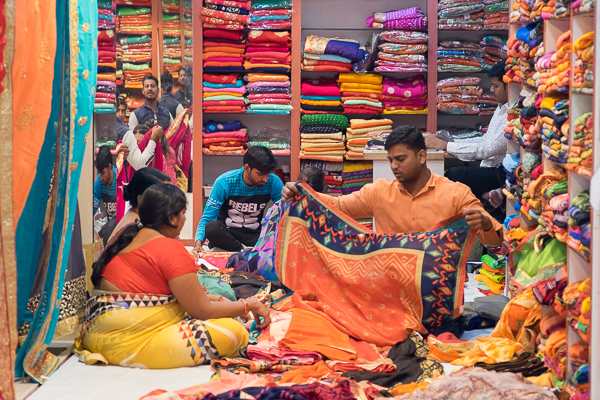 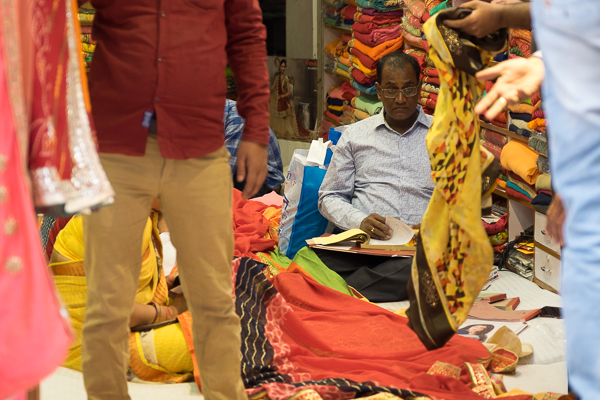 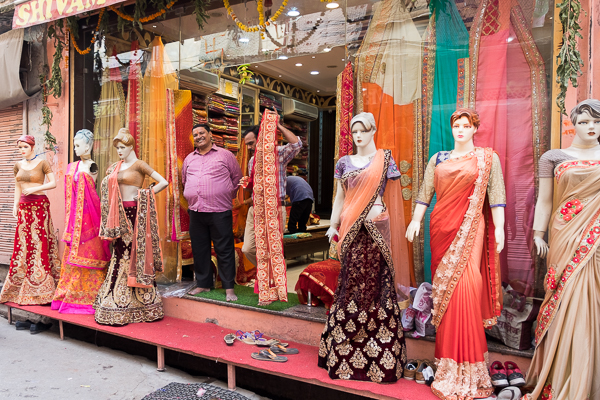 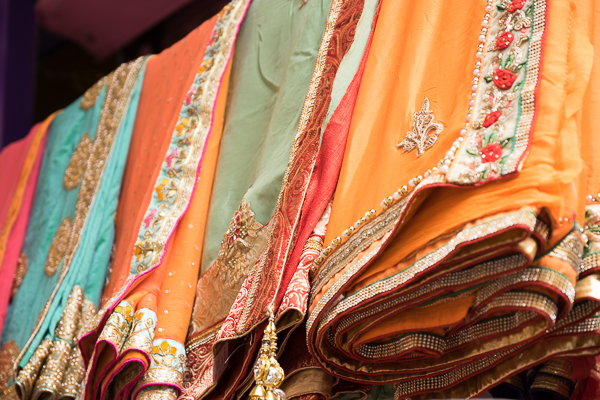 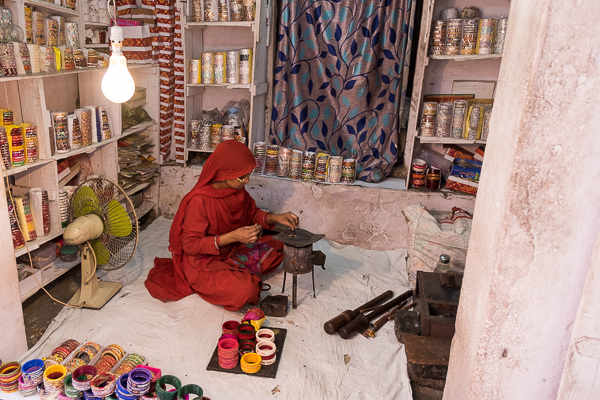 Bangles are popular in India. Historically, you wouldn’t catch a married woman without her bangles. Now both single and married women can be found expressing their fashion sense through their bangle choices.

We watched as women sat across from one another trying on a wide range of bangle styles and colors. 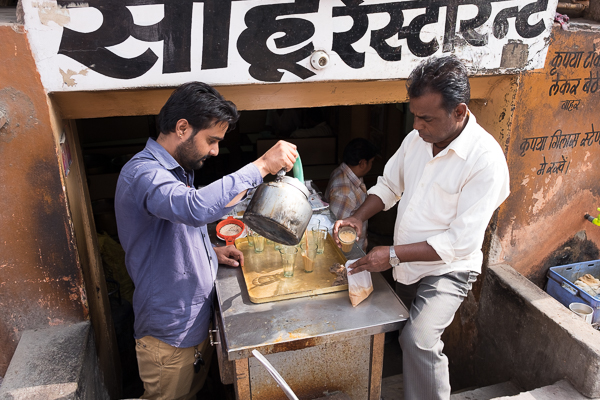 This popular spot, Sahu ki Chai, has been run by the same family for decades. You can drink your marsala chai tea in a small glass while standing on the street or taking it to go in a plastic bag. 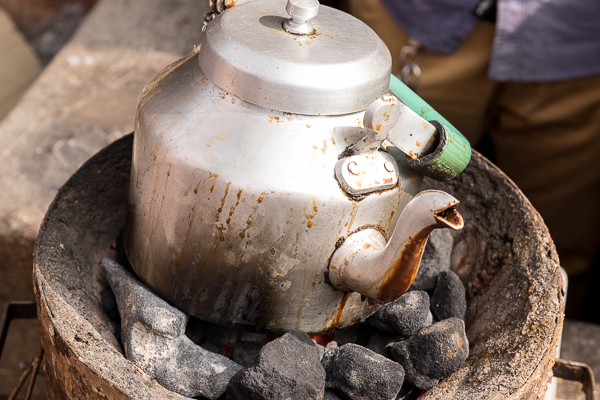 What’s the shop's secret to success? A long simmering of the milk over a coal stove. 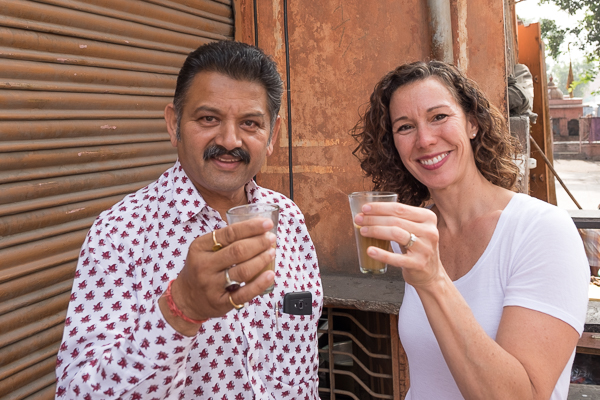 Partially due to the experience, I will always claim this as my best glass of chai tea. Cheers to our guide for showing us the more colorful side of Jaipur.