It might be hard to pull yourself away from a city as captivating as Paris for a day, but trust me. Colorful enchantment awaits you at Claude Monet’s home and gardens in Giverny. 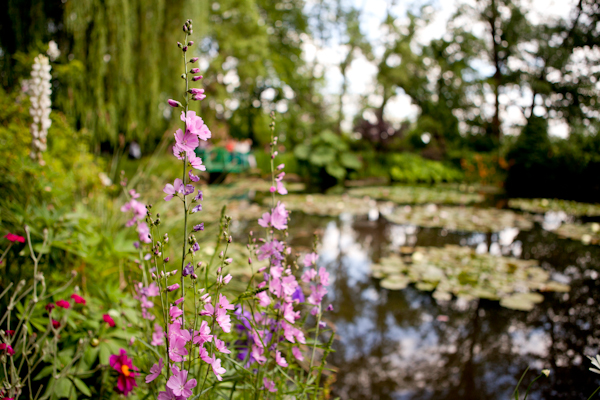 While Giverny is about an hour's train ride from Paris, it’s a good idea to have a backup transportation plan. Worker strikes limited the train schedule during our stay, requiring us to join a minibus tour to get there.

It’s not a bad way to go. As an added bonus, we even got to hear about Claude Monet’s life in Portuguese as well as English on the way there, thanks to the Brazilians traveling with us. I tease, but it actually was nice having a break between bites of information to digest them more fully.

I prefer factoids to be delivered to my brain via trickle vs. fire hose.

Walking Monet’s still-flourishing estate, it’s easy to see where he drew his inspiration.

Every flower imaginable – and even some that seem out of this world – fill the grounds and spill out the front door of Monet’s home like a welcome carpet.

Monet created his pride and joy, the water garden, by diverting a narrow arm of a nearby river. Bamboo stalks and greenery obscure the pond as you travel a narrow path. Then the first view opens up and devours your expectations. 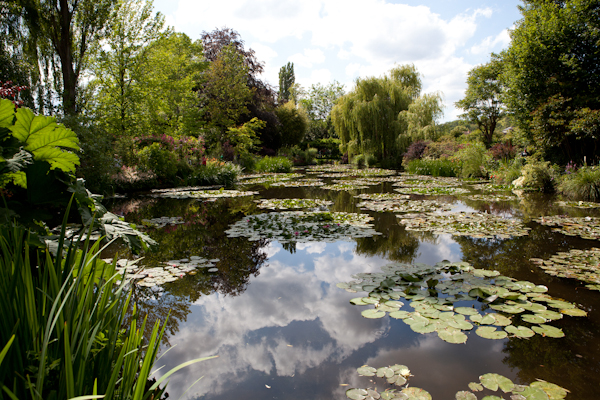 Sure, we knew it would be picturesque. What we didn’t count on was how the quality of light bouncing off the water would vividly reflect everything in its view. Clouds, weeping willows and brilliant blue skies seemed even more magnificent in their reflection framed by water lilies. 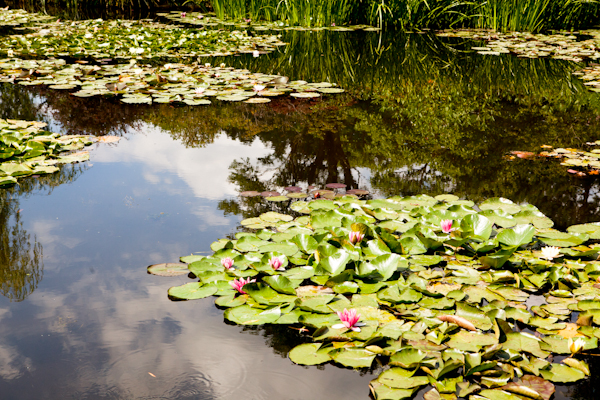 After crossing the Japanese-style bridge painted green instead of traditional red, we sat beneath a weeping willow tree to take in the scene. 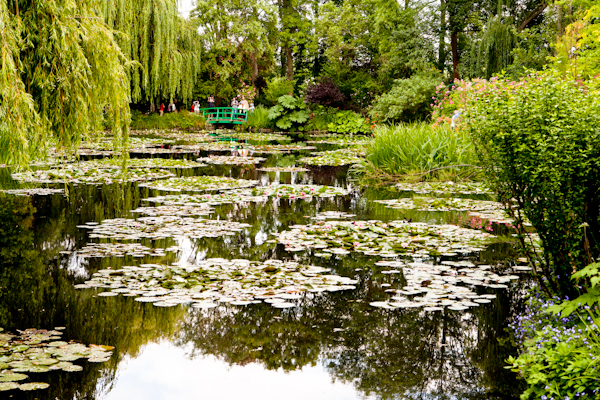 In my book, world-class views typically require elevation, an expansive canyon, massive waterfalls, an ocean, skyscrapers or waterfalls. Those are the elements that usually make the greatest impression on me.

Giverny is different. It qualifies as a world-class view because of the feeling it evokes. Instead of using scale, it overwhelms the senses with color.

It made us want to bottle up a piece of the experience to draw upon for years to come.

While Monet had his paintbrush, I have my camera. Admittedly, my instrument doesn’t do it justice.

I felt like a kid in a candy store as a snapped photos of as many flowers as my patient husband could tolerate.

Fortunately for Monet, people rewarded his artistic genius while he lived. And live well he did for 43 years (1883-1926) in his home in Giverny. 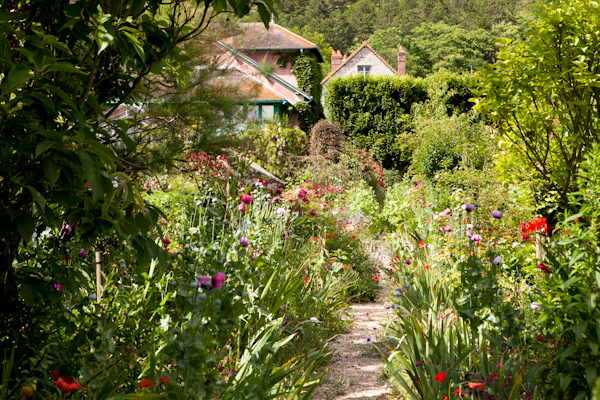 While the house is sizeable, the walls shrink a bit with the thought of his eight children scampering about.

Not surprisingly, his first studio on the main floor that was later converted into a sitting room is filled with family photos and his paintings. Moving through the house, Monet’s appreciation of Japanese art and furnishings is on display.

Upstairs in Monet’s bedroom, large windows frame another stellar view of the main garden. Fortunately for us, they were open and a cool breeze beckoned us to stop and linger. With the closing time approaching, we pressed on. 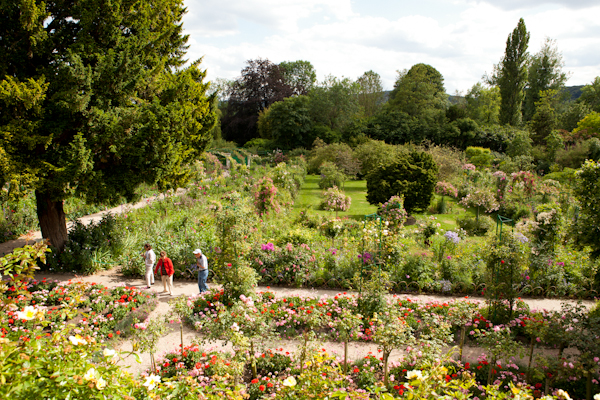 The home’s crowning feature came at the end of the tour as we entered the bright yellow dining room and basked in its sunny disposition. Even Monet knew how to master color choices in his own home to evoke an emotion.

The tour culminates with the pièce de résistance – its kitchen adorned with blue-and-white Rouen tiles. It was outfitted with what I’d expect to be a modern stove and ovens for the time.

As we exited through the kitchen door to the front of the house, roosters crowed and the late afternoon light gave it a warm, golden glow. It’s how I imagined Monet would have liked seeing it. 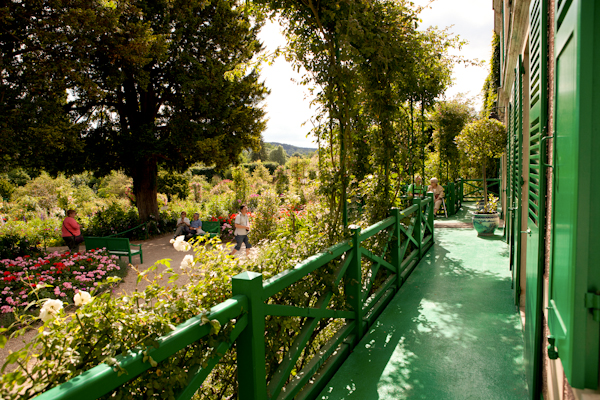 In search of coffee

We had just enough time for a quick coffee before reboarding our minibus. With the main museum closing down, we ventured about a block into the town of Giverny.

We found a nice corner of solitude and caffeine at the Hotel Baudy. The grocery-turned-hotel became a popular spot for artists during the late 1800s.

The hotel owner, Madame Baudy, added several studios in which the resident artists could work. Cezanne used one of the studios here in November 1894, according to a plaque on the hotel’s brick exterior.

We ordered an expresso at the bar and headed across the single-lane road to its tree-covered patio. Cheerful turquoise-painted metal tables and chairs topped with bright orange umbrellas furnished the outdoor eatery. A hedge bordered the area, giving it nice structure without obstructing our views of the beautiful fields around it.

Hotel Baudy is a place I could see spending an evening enjoying an apertif, meal or overnight stay. I’d like to have seen the place bustling with artists, just as Monet might have experienced it.

You don’t have to be a Monet fan or even the least bit interested art to be moved by this place. Having visited Giverny, the next time you see a Monet painting you’ll have a deeper connection and appreciation for the man and his source of inspiration.

Serendipitously, we returned home to Tulsa, Oklahoma, to see the opening night of the Philbrook Museum of Art’s “Monet and the Seine” exhibit. It pulls together a collection of his work depicting mornings on the river he had built a life around.

I smiled inside knowing I had just walked through his home, run my fingers through the flowers of his garden and gotten a feel for the town he called home.

It may be just a glimpse into the life of the man, but it’s an experience that will forever change the way I look at a Monet painting. 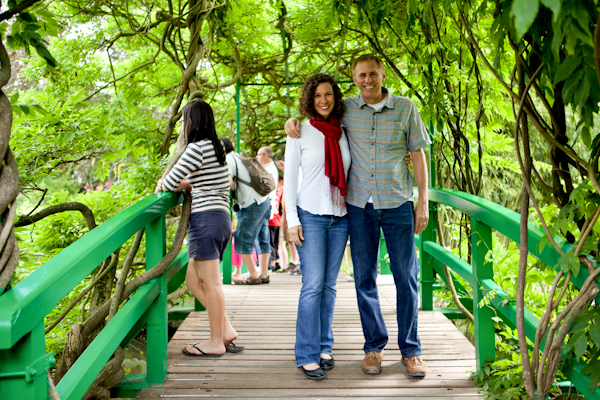