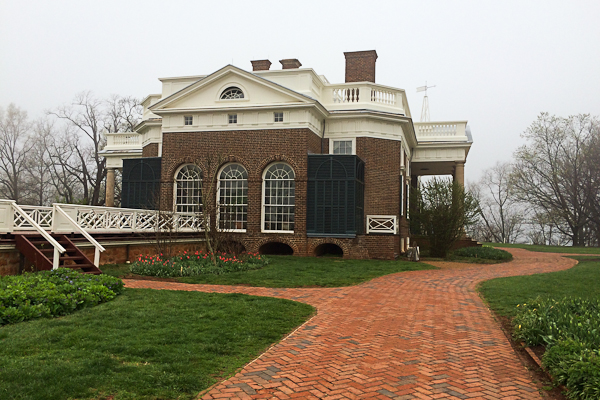 Monticello shows its true colors in the spring.

No photos allowed. That instruction is not what the Snapshot Traveler likes to hear as she enters a famed building she’s been itching to see for years.

Those are the rules and I abided. Yes, I'm a rule follower, so you won’t find as many shots in this post. But I hope to have captured enough visuals to encourage your visits to two important homes – Thomas Jefferson’s Monticello and James Madison’s Montpelier in Virginia.

Visual appeal is only part of the story. The architecture, furnishings, books and knickknacks are amazing, but even more fascinating are the tidbits of history you’ll pick up about the place, people and times of Monticello and Montpelier.

The tour guides at both homes shared interesting stories and had us glued to every word. By the end of the tours, I was ready to procure multiple biographies on Jefferson and Madison to learn more. Limited luggage space tempered my potential book-buying binge.

If you’re in the Charlottesville, Virginia, area, make plans to see both homes. If you’re not in the area, plan a trip soon.

As you plot your visit, consider adding James Monroe’s Ash Lawn-Highland home to your itinerary. We missed seeing the fifth U.S. president’s digs this trip, but hear they’re another historic eye-opener. All three homes are within minutes to an hour’s drive of one another.

Responsible for designing every detail of Monticello, our nation’s third president constructed and modified his dream home and its surrounding landscape over 40 years.

Jefferson wanted it to look like one story, so he elongated each of the home’s windows to look as if it was one continuous piece of glass. To accomplish this effect, the second-story rooms used the upper third of the windows, which began from the floor of each room. 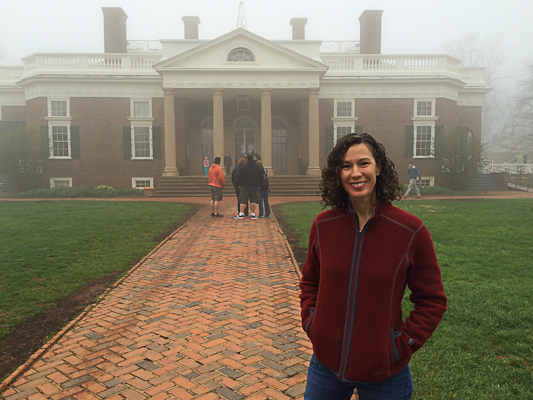 Welcome to Monticello – this is where we began our tour after a short shuttle ride from the visitor center entrance.

Borrowing architectural concepts from his time as a minister to France, Jefferson incorporated the use of skylights to illuminate the third-floor bedrooms. Other French loves he wove into his home and lifestyle included food, alcove beds, parquet wood floors and the fashionable color of crimson.

As soon as you walk into the home, you’re aware of Jefferson’s love of science, nature and art. He transformed the reception area into a private museum.

Moose antlers, a clock contraption that lifts cannonballs to show the weekdays marked on the wall, framed self-made maps and Indian artifacts from the Lewis and Clark Expedition commissioned during his presidency are a few items displayed.

Throughout the 33-room, 11,000-square-foot house, you’re struck by its practicality and function. While Jefferson liked fine things, his style seemed to eschew palatial pomposity. There’s no grand staircase in Monticello because of its impracticality for taking up too much space, Jefferson reasoned.

While not every item in Monticello is original, two-thirds of its contents shared space with the author of the U.S. Declaration of Independence. In Jefferson’s library, considered his most sacred space, you’ll find a few pocket-size original books. The riding boots he wore rest beneath a window in the corner of his bedroom. A polygraph, an old-fashioned letter-copying device used by Jefferson until his death, sits on a desk. 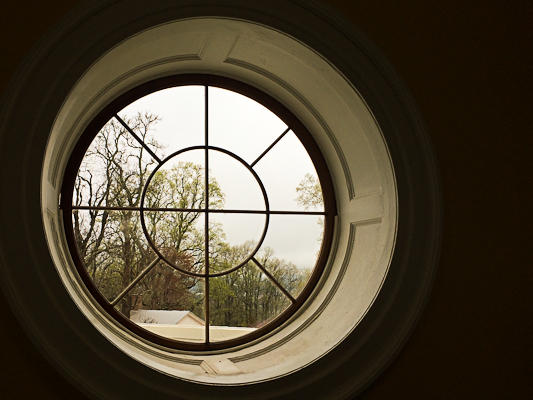 Finally, we enter a room we could photograph. Circular windows like this one and an oculus skylight illuminate the dome room on Monticello's third floor.

On the opposite side of the entrance to the dome room are these doors, which open into a nice hiding spot.

The landscape surrounding Monticello, which means little mountain in Italian, and “dependencies” for servicing the house are equally interesting. Two wings of service rooms for the kitchen, smokehouse, dairy, wine, beer, ice house and carriage bays run below the home. Flower gardens, vegetable varieties and fruit orchards adorn the grounds. 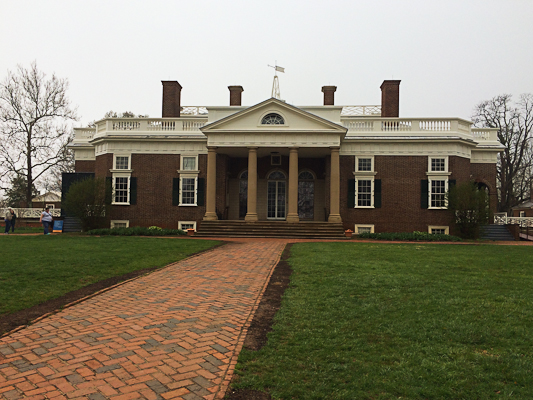 Back view of Monticello 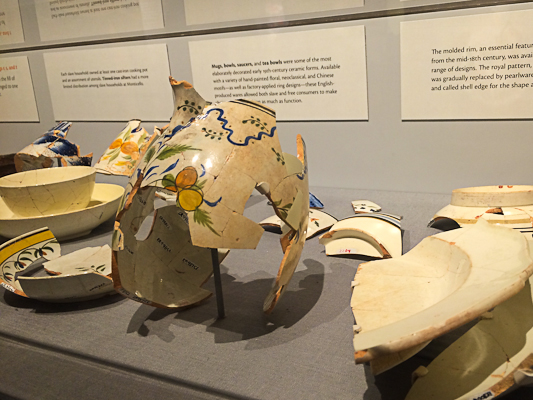 Pottery pieces from Monticello's heyday are on display in the home's cellar.

The unsavory side of Monticello is exploring its slavery roots. Jefferson owned about 200 slaves who worked on the plantation.

The irony of the man who declared “all men are created equal” and “have the right to life, liberty and the pursuit of happiness” isn’t brushed under the rug by the people who run Monticello. Instead, it’s explored and dissected online and during guided tours specifically covering life as a slave at Monticello.

Other interesting facts we learned about Jefferson during our tour:

An easy hour-long drive away from Monticello, you’ll find the home of Thomas Jefferson’s colleague and dear friend, James Madison. 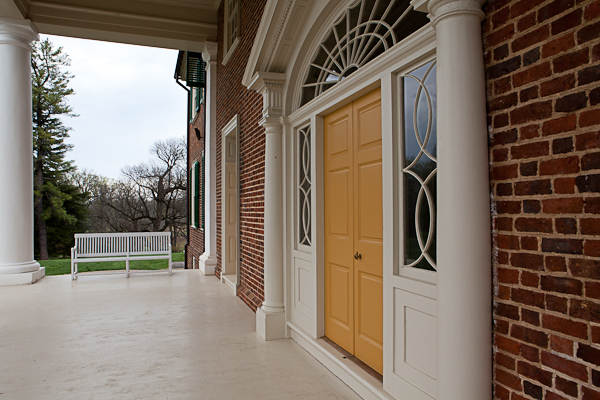 Before the luxury of cars and paved roads, the distance between the two homes meant extended visits sometimes a month-long to make them worth the travel time.

As you enter the gates to Madison’s childhood and adult home, Montpelier, your attention is drawn to its most important room, the second-story library where the U.S. Constitution was born. 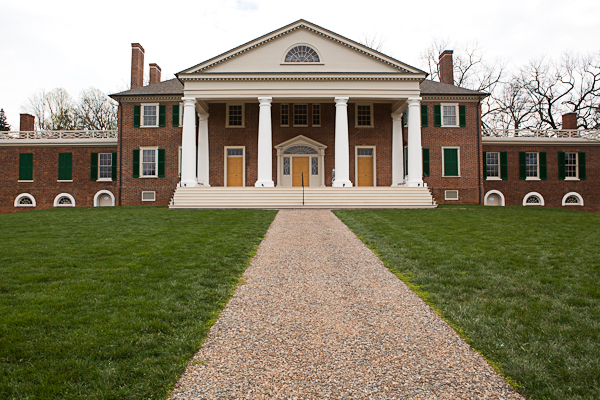 Welcome to Montpelier. Check out the second-story center windows. This is the room where Madison studied and drafted the U.S. Constitution.

Described by our guide as the most important room in America, it’s the setting where Madison holed up in 1786 to study the fall of other republics, the causes of tyranny and what makes a democracy work. Jefferson and others sent him hundreds of books to assist in his drafting of the U.S. Constitution, which ended up being based primarily on the government foundations of ancient Rome and England.

It was a big task considering most of the constitutions of other nations have only lasted an average of 17 years, according to our guide.

Imagine being in Madison’s shoes and asking your parents if you could move home and spend six months in your old library to devise a plan for running a new nation. That’s heady stuff. I think my parents would have told me to get a job.

Just like our Monticello experience, our guide was knowledgeable and knew how to weave a riveting story about the lives of Dolley and James Madison, which included a delinquent son who ended up costing the family dearly.

There’s quite a love story between Dolley and James to learn about. You'll also hear how she contributed to causes behind the scenes through her dinner parties that brought together unlikely companions on both sides of the political fence.

While our fourth president is known as the father of the U.S. Constitution and creator of the Bill of Rights, Dolley became the first American president's wife to be adored as America’s “first lady.” 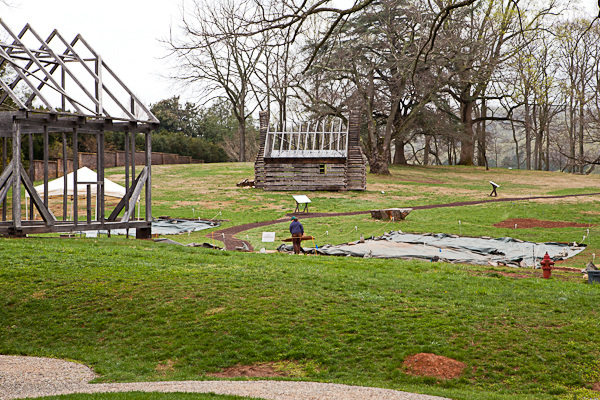 As we wrapped up our formal tour in the most famous room of the house, our guide reminded us that we were standing on the floorboards where the document of our supreme law was born.

As she described what the constitution ended up doing for us as a nation, a woman next to us wiped tears. Then the guide got teary-eyed. It was a sweet exchange reminding all of us of our good fortune to be Americans.

Aesthetics alone make Monticello and Montpelier worthwhile trips, yet there's so much more to love about each place. A deeper understanding of Jefferson and Madison transform the visits into meaningful markers in appreciating our nation’s roots.

To get a better appreciation of U.S. history, what's your favorite site to visit?